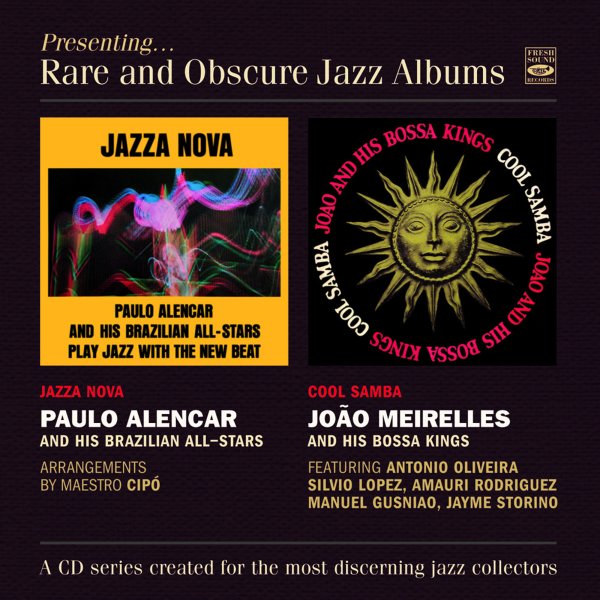 Rare bossa jazz from the start of the 60s – two great albums on a single CD! First up is Jazza Nova by Paulo Alencar – an amazing lost bossa jazz session recorded in Brazil, but issued here in the US by Atlantic! Paulo Alencar's group is supposedly filled with "all stars" – and even though they're not actually named, the record's got this fantastic jazzy vibe throughout – very much like some of the new experiments in bossa and samba jazz from some of the bigger names of the time – including the larger combo recordings by the young, pre-Brasil 66 Sergio Mendes! Fast rhythms and jazzy solo work throughout – on titles that include "West Samba", "It's Really Bossa", "Bossa No 2", "Where Was I", "Hello, America", and "Zirigidoom". Next is the album Cool Samba – a very nice album of bossa instrumentals, released in the US under the obscure name of "Joao & His Bossa Kings". Joao is listed on the label as Joao Meirelles – also known as JT Meirelles on his more famous Brazilian recordings – and we wonder if Battle gave him the name of "Joao" to make folks think he was Joao Gilberto, who was selling a lot of records at the time! Whatever the case, though, this is a great album of tight little bossa jazz tracks – served up with small combo instrumentation that includes alto, flute, piano, trumpet, and percussion. Titles include "Nacao Nago", "Solucao", "So Danco Samba", "Samba Toff", "Samba Sem Nome", and "Essa Nega Sem Sandalia". CD features the bonus track "Moeda Quebrada" by Paulo Alencar.  © 1996-2022, Dusty Groove, Inc.