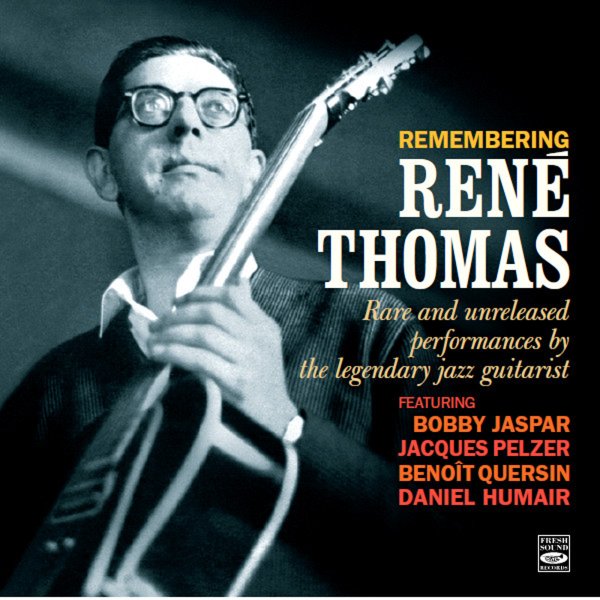 A double-length collection of material from this legendary European guitarist – a player as important to the overseas scene in the 50s as Barney Kessel and Kenny Burrell were over here! Rene Thomas hails from Belgium, but recorded some of his most important work in Paris – and although some of his key albums have been reissued, this set does a great job of filling in the gaps – by providing material from one very rare album, plus a wealth of live material that has mostly never been presented before! The set begins with the Jacques Pelzer Modern Jazz Sextet album from 1955 – a set led by alto saxophonist Pelzer, but which features equally important work from Thomas on guitar – clean, clear, and wonderfully dexterous – very much in the best modern jazz guitar tradition of the 50s! Other players include Jean Fanis on piano and Herman Sandy on trumpet – and titles include "Motion", "Whose Blues", "Lover Man", and "Stella By Starlight". The set then moves through a range of early 60s live recordings in a variety of settings, on 20 additional tracks – with the guitar of Thomas in groups that move from trios through quintets – with players include frequent partner Bobby Jaspar on tenor and flute, plus Jack Dieval, Amadeo Tommasi, and Joel Vandroogenbroeck on piano – and even one performance with Jimmy Smith on Hammond! Titles include "Milestones", "All Mornin Long", "Oleo", "Ballata In Forma Di Blues", "I Remember Sonny", "Blues", "Easy Living", "Our Delight", "Stardust", "Never Morning", and "It Could Happen To You".  © 1996-2022, Dusty Groove, Inc.