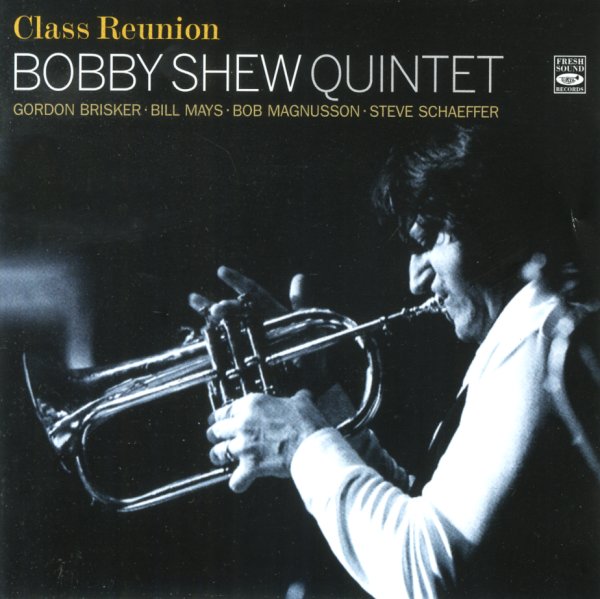 An album that bristles with color right from the very first note – thanks not just to work from Bobby Shew on trumpet and flugelhorn, but also Gordon Brisker on tenor and flute, and Bill Mays on both acoustic piano and Fender Rhodes! The group is one that cut a few great albums around this time – almost out of time in their approach, as they're neither back to tradition jazz albums, nor inflected with any sort of 70s funk or fusion elements either – just focused, well-done material that features a fair bit of original compositions by group members too! Titles include "Run Away", "Navarro Flats", "Class Reunion", "Kachina", and "She's Gone Again".  © 1996-2023, Dusty Groove, Inc.

First Flight – Complete Recordings
Catalyst/Fresh Sound (Spain), 1976. New Copy 2CD
CD...$24.99 28.99
Wicked work from saxophonist Don Menza – really stretching out here in a massively beautiful 70s session for Catalyst Records! Menza was a heck of a player, but one who mostly kept things pretty close to the chest – yet on this album, he blows with a soulful, flowing tone that's simply ... CD

Ju Ju Man/Love Song
Catalyst/Fresh Sound (Spain), Mid 70s. New Copy
CD...$15.99 18.99
Two overlooked albums from Gary Bartz – back to back on a single CD! First up is Ju Ju Man – a rare treat from saxophonist Gary Bartz – material recorded for a small west coast label after his initial classics on Prestige Records – but in a vibe that's different than the ... CD

Soul Jazz (with bonus tracks)
EMI/Fresh Sound (Spain), 1960/1961. New Copy
CD...$15.99 18.99
One of the most hard-hitting albums ever cut by pianist Georges Arvanitas – an early effort that's all soul jazz all the way through! Although Arvanitas is best known as a committed modernist, especially in later years, this sweet early 60s session is a stone cooker in the best mode of Blue ... CD

Telepathy
Jazz Hounds/Fresh Sound (Spain), 1978. New Copy
CD...$15.99 18.99
Bobby Shew is one of those players who never fully seems to get his due – a fantastic musician on both the trumpet and the flugelhorn – able to create these really beautiful sounds through thoughtful phrasing and personal conception – all of which comes out perfectly in this early ... CD

Martinete A Trane
Fresh Sound (Spain), 2022. New Copy
CD...$15.99 18.99
A beautiful little record, and one that seeks to unite two key inspirations for bassist Miquel Alvarez, both flamenco and jazz – but in a way that doesn't involve any flamenco guitar at all! Instead, there's maybe a bit of the snapping rhythms that you'd hear from the Spanish musical mode ... CD