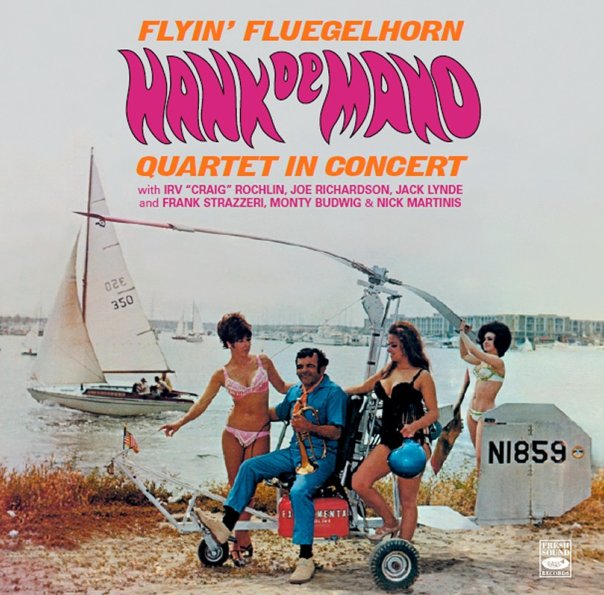 A pair of rare albums from Hank De Mano – a flugelhorn player from the LA scene of the 60s – one who mostly seemed to work in a live setting! On Flyin Fluegelhorn, Hank De Mano is a great player on the flugelhorn – hardly "flyin" at all, despite the title – and instead a very careful, sensitive soloist who really takes his time with his instrument – and opens things up like a rare few players on that horn! The set's a live one, but has an intimate vibe throughout – nicely long tracks with a quartet that features Irv Rochlin on piano, Joe Richardson on bass, and Jack Lynde on drums – all working with lots of room for DeMano do really stretch out and do his thing! Titles include "Four", "Summertime", "Lullaby Of The Leaves", and "These Foolish Things". Next is the Hank De Mano Quartet Live In Concert – a rare set of live material, recorded in a really stretched-out, open formation that's quite unique for the time! Hank plays flugelhorn throughout the set – blowing in the spacious tones remind us a bit of Art Farmer's handling of the instrument, or of the wonderful work Clark Terry did on the horn when working with Bob Brookmeyer. Like both of those players, Hank's sound here is a wonderful balance of tone and timing – never too rushed, and always taking the time to find the right sort of style and phrasing for each tune. He's working here with a very well-matched group, too – one that features a young Frank Strazzeri on piano, plus Monte Budwig on bass and Nick Martinis on drums. Strazzeri's especially great, and shares a similarly fluid sensibility with De Mano – and titles include long takes on "Summertime", "Delilah", "Long Ago & Far Away", and "Angel Eyes".  © 1996-2022, Dusty Groove, Inc.