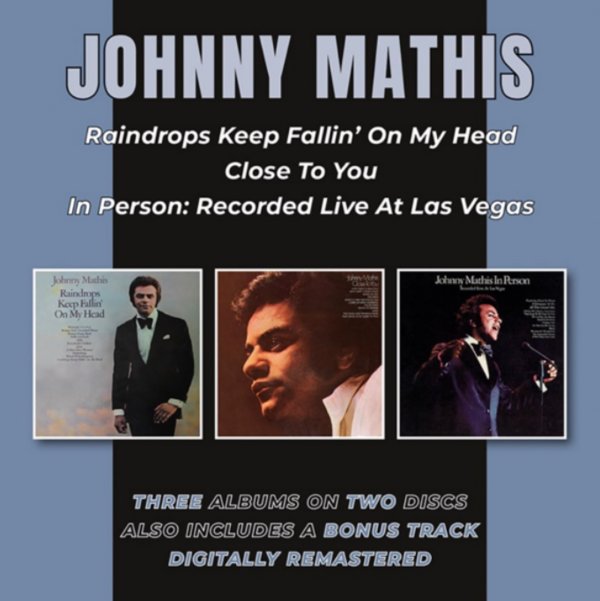 Three full albums from Johnny Mathis in one single set – the last of which was actually issued originally as a 2LP set! First up is Raindrops Keep Fallin On My Head – great magic from Johnny Mathis at the start of the 70s – a set that has Johnny working through some groovier tunes from the second end of the 60s – all set to some mighty nice backings from Ernie Freeman! Ernie brings in a fair bit of strings, but also gives things that soulful punch at the bottom that you'll know from his 60s material – and the Mathis vocal maybe is a bit more crisp in the setting, although still with that wonderfully full range that always made the man so unique! Titles include great versions of "Watch What Happens", "Raindrops Keep Fallin On My Head", "Midnight Cowboy", "Everybody's Talkin", "Jean", "Odds & Ends", and "Bridge Over Troubled Water". Close To You has Johnny Mathis kicking off with his take on the Burt Bacharach title hit, then moving through a number of other late 60s hits – some of which are perfect for the Mathis style, others of which make for a mighty nice stretch – and we mean that in the best way possible! There's some backing elements here that are groovier than usual for Johnny – pushing him in a nice way with modes that seem a bit borrowed from sunshine pop and soul – on titles that include "Come Saturday Morning", "Evil Ways", "Yellow Days", "The Long & Winding Road", "Wave", and "Pieces Of Dreams". In Person is double-length live set from Johnny Mathis – recorded live in person in Las Vegas – with titles that include a fair number of medley tracks that are a nice change from his studio records – the kind of material that really allows Johnny to show his talents as an entertainer in a live setting! There's also some non-medley tracks 6too – including "And Her Mother Came Too", "Maria", "If We Only Have Love", "I Got Love", "Day In Day Out", "Come Runnin", "In The Morning", and "Love Story".  © 1996-2023, Dusty Groove, Inc.