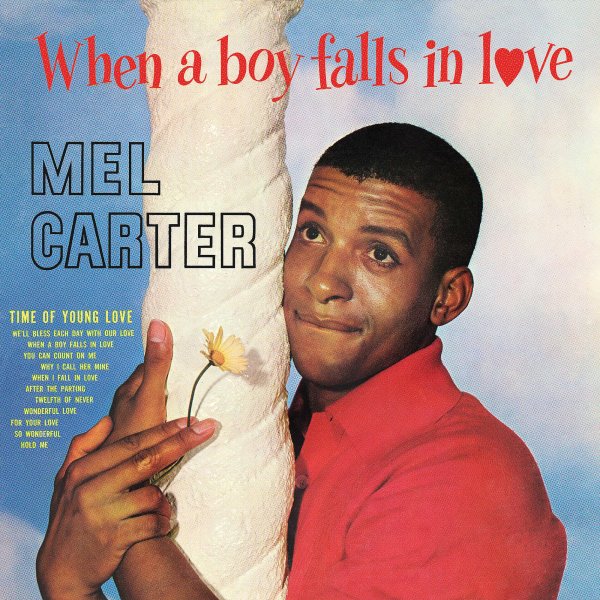 When A Boy Falls In Love

Also available
Mel Carter — When A Boy Falls In Love (with bonus tracks) ... CD 11.99
The rare first album from Mel Carter – a cool, classy singer from the west coast scene – and one who echoed some of the more sophisticated styles from back east by soul artists like Jerry Butler or Walter Jackson! Mel's definitely got a style that's all his own – and his voice would soar to bigger fame a few years later on Liberty Records – but this early set for the rare Derby label is a gem through and through – with these well-crafted uptown soul arrangements by Rene Hall and Joe Hooven – both of whom really know how to help Carter's voice soar in the sessions! Titles include "Time Of Young Love", "Wonderful Love", "After The Parting The Meeting Is Sweeter", "Hold Me", "For Your Love", "So Wonderful", "You Can Count On Me". and "We'll Bless Each Day With Our Love".  © 1996-2022, Dusty Groove, Inc.

You Got The Power – Cameo/Parkway Northern Soul 1964 to 1967 (180 gram blue vinyl pressing)
Cameo/Abkco, Mid 60s. New Copy 2LP
LP...$31.99 32.99
Rare soul gems from a legendary Philly family of labels – the Cameo/Parkway imprints, and the related Fairmount as well! Cameo and Parkway were home to plenty of pop hits at the start of the 60s – but they always put their money back into the scene, and were close to the ground digging ... LP, Vinyl record album