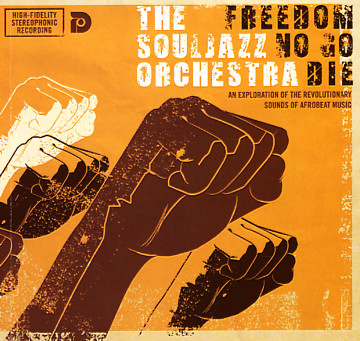 More Afro Funk than the soul jazz you might guess from the group's name – but that's OK with us, because the record's plenty darn great! Souljazz Orchestra are one of the best of the current wave of Afro combos to hail from Canada – and they manage to get an incredible full sound from a surprisingly small range of instruments – usually just 3 saxes, a trumpet, keyboards, and percussion – but played with a sense of power to earn them the "orchestra" in their name! There's a definite Fela influence going on here – grooves that move fast with very skittish rhythms – snaking out with great horn bits and keyboard lines. But the overall approach is a bit tighter too – much more focused at times, on slightly shorter tunes, about half of which are vocal numbers. The Latin-inflected "Little Habana" has the group breaking format a bit – and other tunes include "Mista President", "The Blind Leading The Blind", "Insurrection", and "Mojuba". 8 tracks in all!  © 1996-2023, Dusty Groove, Inc.