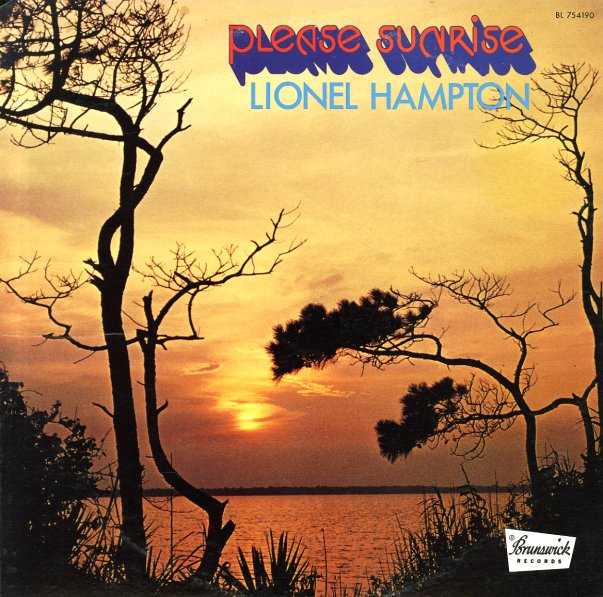 Sweet vibes from the great Lionel Hampton – sounding different here than both his early swing years, and his later small combo modes – and working in a style that has his instrument in the lead over hip Chicago soul backings from the team at Brunswick Records! The album's got a nicely laidback vibe, and a mix of core instrumentation with larger charts that's not unlike some of the cool Cadet Records work by Ramsey Lewis at the end of the 60s – except with vibes, not piano. Willie Henderson and Tom Tom Washington did the arrangements – and nearly every track's an original by Eugene Record. Titles include "Please Sunrise", "Soulful Autumn", "It Must Be Love", "I Did It", and "I Call It Trouble". Tasty stuff, and tight Chicago soul grooves!  © 1996-2022, Dusty Groove, Inc.
(Still sealed, with a cut corner.)

Taste Of Hamp
Glad Hamp, Late 60s. Sealed
LP...$11.99
Lionel Hampton's holding a sandwich on the cover, but that doesn't stop him from serving up some mighty nice grooves – in the unique manner that's made some of his self-released albums like this so great! Sivuca makes a guest appearance on a few tracks, as does singer Carmen Costa – ... LP, Vinyl record album

Stop! I Don't Need No Sympathy!
Brunswick, 1974. Sealed
LP...$24.99
An excellent album of tight little instrumentals – one that features the combination of Lionel Hampton's vibes with the groovy Chicago soul production of Brunswick Records! The tracks bounce along nicely, as if they were soul instrumental 45s for Brunswick – almost more along the line ... LP, Vinyl record album

Too Much Piano
Brunswick, Late 50s. Very Good-
LP...$6.99
A nice relic from the Chicago scene of the postwar years – piano from Dick Marx and bass from Johnny Frigo! LP, Vinyl record album