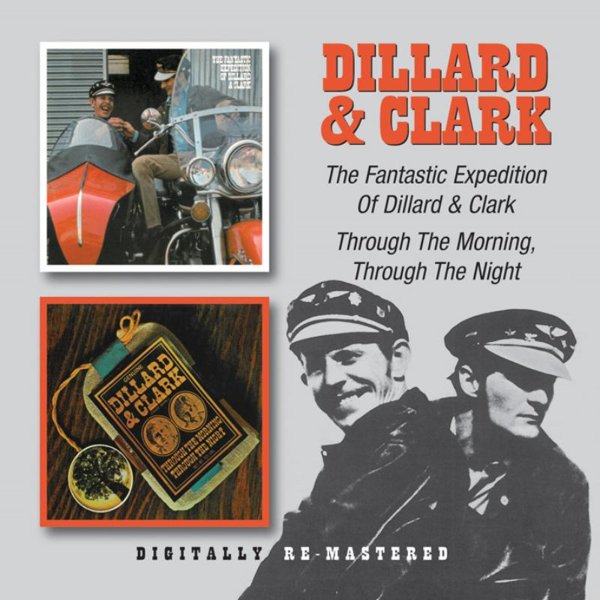 Two seminal albums from Doug Dillard and Gene Clark – back to back in a single set, and with bonus tracks too! Fantastic Expedition is a mellow masterpiece of sunshine country rock from Dillard & Clark – a duo that featured Gene Clark of the Byrds and Doug Dillard of the Dillards – in a wonderful blend of Cali longhair harmonies, back porch psych, and expert Byrds-y tunefulness! Dillard provides lots of great banjo and some chirping fiddle – along with mandolin and chiming acoustic guitars that bring a bit of bluegrass into the sound – but the record has California written all over it thanks to the vocal harmonies and wistful tune craft. Really close to perfection – and deserves as much praise as the better known country rock benchmarks of the era – including the early two classics by Flying Burrito Brothers. Tracks include "Out On The Side", "She Darked The Sun", "Train Leaves Here This Mornin", "With Care From Somewhere", "Git It On Brother", "In The Plan", and "Don't Come Rolling". Through The Morning Through The Night is the amazing second album from the great duo of Gene Clark and Doug Dillard – and a record that's maybe even better than the first! Even though the set's a key part of the late 60s Byrds and Flying Burrito Brothers legacy – the vibe is probably more like the latter than the former – that is, more country than rock – in a way that really has the Clark/Dillard team getting even more confident with that side of their sound – drawing both on Doug's roots, and pointing the way toward his years to come. Clark provides some excellent songwriting, and his vocals are what really set the album apart – and the album also features some backing vocals from Donna Washington, amidst a mostly acoustic lineup that includes bluegrass instrumentation – and guest work from Sneaky Pete Kleinow on steel guitar, Chris Hillman on mandolin, and Bernie Leadon on guitar. Titles include "So Sad", "Corner Street Bar", "I Bowed My Head & Cried Holy", "Kansas City Southern", "No Longer A Sweetheart Of Mine", "Polly", "Four Walls", and "Through The Morning Through The Night". Bonus tracks include "Why Not Your Baby", "Lyin Down The Middle", and "Don't Be Cruel".  © 1996-2022, Dusty Groove, Inc.

Don't Turn Your Back On Me/This Is Jackie De Shannon
Liberty/BGO (UK), Mid 60s. New Copy
CD...$12.99 18.98
A pair of albums from the great Jackie DeShannon – back to back on a single CD! First up is the UK-only release Don't Turn Your Back On Me – a great batch of material with a sweet west coast pop groove – and one that includes a fair number of original tunes written by Jackie ... CD

Lazy Racer (Japanese paper sleeve edition)
A&M/Big Pink (South Korea), 1979. New Copy
CD...$18.99 22.99
A late 70s gem from A&M records – a set that does a really great job of updating the sunny, harmony-drenched sound of some of the label's classics! At some level, the record's maybe got more of an early 70s Cali vibe overall – well-produced, but with a sense of innocence that you ... CD