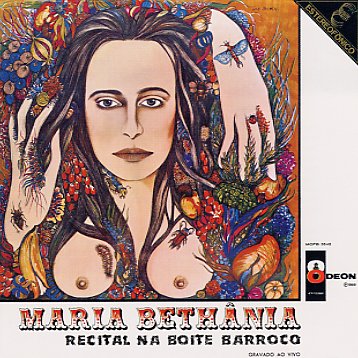 One of Maria Bethania's first albums, and a beautiful set of live recordings – with a vibe that's a lot more uptempo and swinging than some of her later work! The style here almost has traces of bossa – a lighter, groovier feel at times than some of the more emotive modes that Bethania became known for during her run of 70s MPB. Backing here is by the bossa-esque Terra Trio, and they accompany her deep rich voice nicely on tracks like "Marina", "Carinhoso", "Marginalia II", "Ele Valava Nisso Todo Dia", and a great version of Caetano Veloso's "Baby". Very cool cover, too – with a trippy painting that has Maria's nude torso covered with flowers and bugs!  © 1996-2021, Dusty Groove, Inc.
(Mono green & white label pressing. Cover is housed in a plastic sleeve laminate which has some aging.)

Wilson Simonal
Odeon (Mexico), Late 60s. Very Good+
LP...$29.99
Killer work from Wilson Simonal – a singer who brought plenty of soul to his samba! Simonal's got a groove that's somewhere in the territory of early work by Jorge Ben – upbeat, lively, and filled with joy – lots of very groovy rhythms that draw from samba roots, but inflect the ... LP, Vinyl record album