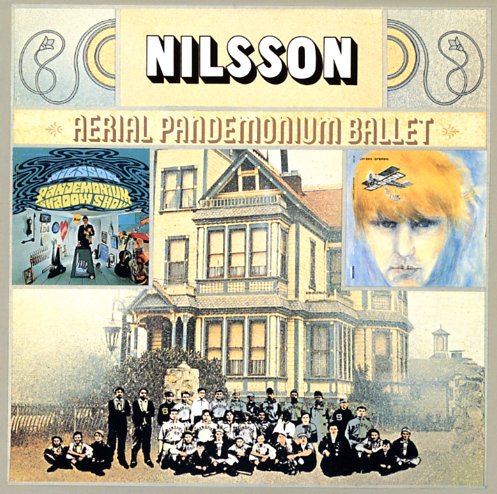 Early revisions of classic Nilsson – done by Harry! Aerial Pandemonium Ballet is an excellent album that remixed a number of great tracks from Nilsson's albums Pandemonium Side Show and Aerial Ballet – kind of working as an early "best of" with a twist – offering alternate versions of already great stuff! The record fuses the best moments of those original LPs, but the ever restless spirit that was Nilsson took the opportunity to re-sing some parts and change the groove in others – is a painting ever truly complete? Titles "One", "Bath", "1941", "Sleep Late, My Lady Friend", and the omnipotent "Everybody's Talkin" – and this CD also has 6 bonus tracks – alternate versions and previously unreleased bits that including "You Can't Do That", "Isolation", "Joy" and more!  © 1996-2023, Dusty Groove, Inc.
(2007 Japanese pressing with 6 bonus tracks – includes obi!)

Aerial Ballet
RCA, 1968. Used
CD...$11.99
Beautiful early work from the great Harry Nilsson – and exactly the kind of record that set him apart right from the start! The tunes are playful, wonderful, and very quirky – yet still sung with this sense of earnestness that sets Nilsson apart from most of the rest of his generation ... CD

Lodger (with bonus tracks)
RCA/Ryko, 1979. Used
CD...$11.99 (LP...$25.99)
The brilliant consummation of Bowie's late 70s years in Berlin – a record that showed he could take the experiments in sound he was crafting with Brian Eno, and turn them back into the kind of creepily catchy rock tunes that first made him a legend! Eno's help on the record is still quite ... CD

Lodger (with bonus tracks)
RCA/Ryko, 1979. Used
CD...$11.99 (LP...$25.99)
The brilliant consummation of Bowie's late 70s years in Berlin – a record that showed he could take the experiments in sound he was crafting with Brian Eno, and turn them back into the kind of creepily catchy rock tunes that first made him a legend! Eno's help on the record is still quite ... CD

Transformer
RCA, 1972. Used
CD...$1.99
Lou Reed's fantastic early solo LP – melding the aloof, plaintive vocal performance style he perfected with the Velvets and unbelievable sharp songwriting with the vamped up, fuzzed out guitars of Mick Ronson, some symphonic touches, and the guiding spirit of Ziggy Stardust era Bowie. This ... CD

Elvis Is Back (Legacy 2CD deluxe edition)
RCA, 1960. Used 2CD
CD...$9.99
Elvis Is Back – back from the Army, that is – pictured on the front cover in civvies, but on the back and inside in his military uniform! The package is a nice welcome home to the King – with lots of photos on the inside of the gatefold cover, or inside the booklet in this case, ... CD