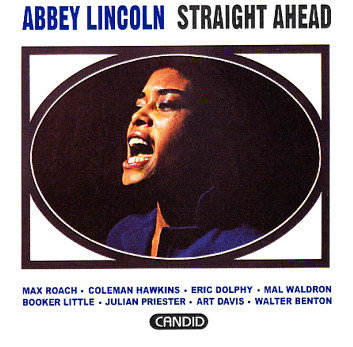 Also available
Abbey Lincoln — Straight Ahead ... CD 5.99
There's nothing Straight Ahead about this record – as the album's one of the first bold statements of modernism from Abbey Lincoln – and the kind of set that builds nicely from the vocal experiments she was doing with Max Roach at the time! The group here is almost one of those largeish Roach ensembles from the Impulse years – an assortment of players that includes Max on drums, Mal Waldron on piano, Eric Dolphy on reeds, Julian Priester on trombone, and Booker Little on trumpet – plus the surprising additions of Walter Benton and Coleman Hawkins on tenor sax! Gone are the sleepy standards of earlier sessions, and in their place is Lincoln's emerging sense of anger, power, and righteous indignation – served up on the original compositions "Retribution", "Straight Ahead", and "In The Red" – plus versions of "Blue Monk", "African Lady", and "Left Alone".  © 1996-2022, Dusty Groove, Inc.