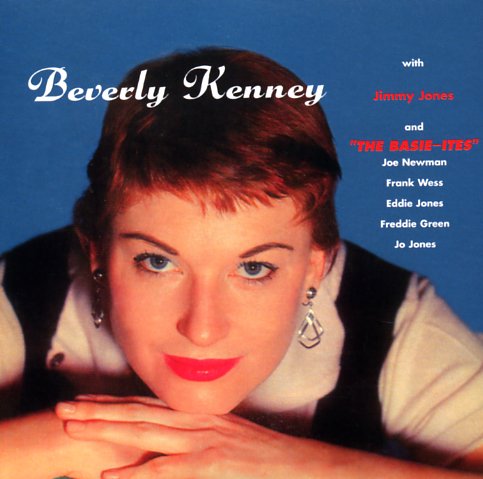 Bev Kenny sounds surprisingly great in this Basie-styled setting – one that has Jimmy Jones handling the keys instead of the Count – with added support from players who include Joe Newman on trumpet, Frank Wess on tenor and flute, and Freddie Green on guitar! Like most of Kenny's sessions of the 50s, there's a quality here that really goes beyond standard vocal jazz – a real feel for the material, and a relaxed command of the small combo setting that must have made Beverly a hell of an act to catch in the clubs. Her natural sweetness is a nice contrast to the deeper tones of the Basie players – and titles include "I Never Has Seen Snow", "The More I See You", "The Charm Of You", "My Kind Of Love", "Who Cares What People Say", and "Can't Get Out Of This Mood".  © 1996-2022, Dusty Groove, Inc.
(Out of print, 2012 pressing.)

Love Letters (Japanese paper sleeve edition)
Liberty/EMI (Japan), 1962. Used
CD...$16.99
A set that has Julie London still working in the breathy and mellow style of her late 50s classics – with very spare backings that really let Julie's vocals take center stage, and often a nice guitar line in the front of the mix, picking its way through the tunes right behind Julie's voice! ... CD

Natural Woman/Is That All There Is?
EMI (UK), 1969. Used
CD...$14.99
Very hip work from Peggy! The 2 albums on the set capture Peggy at the end of the 60s – a time when she was really picking up some groovier sounds of the time, and working in a melange of rock, pop, jazz, and just plain groovy and mod styles. The overall track selection's a lot cooler than ... CD

Something Wonderful
Capitol/EMI, 1960. Used
CD...$6.99
A classic set by the incomperable Nancy Wilson! The wonderful tunes here are set to really sweet arrangements by Billy May. It features mostly an assortment of standards, done with Wilson's pitch perfect, sophistisoul touch! The real standout here is the impeccable "Guess Who I Saw ... CD

Sing Along With Basie
Roulette/EMI (Japan), 1958. Used
CD...$6.99 (LP...$2.99)
One of the more obscure albums by Lambert, Hendricks, and Ross – a session of Basie tunes, performed with backing by the Count, plus additional lead vocals by Joe Williams, the voice most closely associated with the Basie group at the time! The style is similar to the trio's Sing A Song Of ... CD