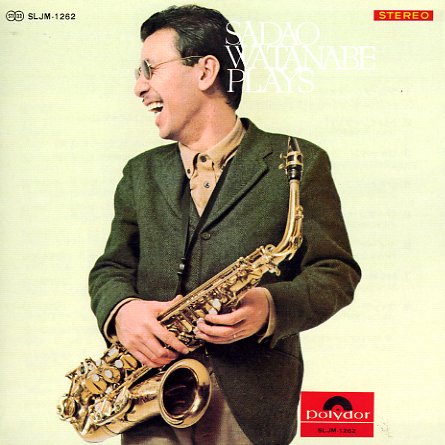 Also available
Sadao Watanabe — Sadao Watanabe Plays ... LP 47.99
A beautiful early album from Sadao Watanabe – a Polydor session recorded before some of his better-known albums for Takt/Columbia, but done with a similar mix of soul jazz and bossa influences! Watanabe's horn has really sharpened up from his already-great earlier sides – and he's working with a sextet that also features trumpet and tenor alongside his own mix of alto sax and flute. The latter instrument is especially nice – used with a great deal of sensitivity at times, especially on some of the original compositions – and the album's a brilliant illustration of the great growth in Watanabe's music during the 60s – proof that the Japanese scene was ready to stretch away from any US or European influences. Titles include the originals "M&M", "Woman Talk", and "Lady Mako" – plus versions of Coltrane's "Naima" and Gary McFarland's "Train Samba" – and a cool modal take on "Chim Chim Cheree".  © 1996-2023, Dusty Groove, Inc.
(Part of the Japanese Jazz Revisited series – SHM-CD pressing!)

Kuchyu Fuyhu
Polydor/Solid (Japan), 1983. New Copy
CD...$20.99 24.99
Trumpeter Toshinori Kondo may have cut some avant-oriented material over the years – but this set is a different sort of record – one that's cut with his Tibetan Blue Air Liquid Band, in a playful mix of rhythms, tones, and jazz! The approach is maybe post-fusion, inflected with a bit ... CD