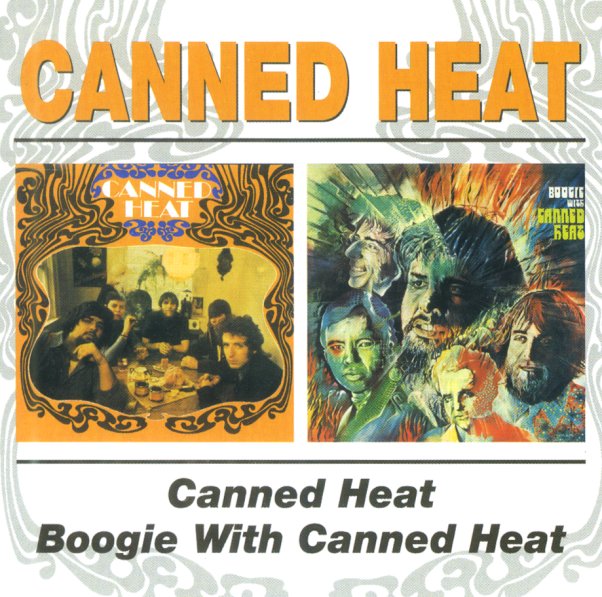 The first two full albums from Canned Heat – back to back in a single set! First up is the self-titled Canned Heat – a seminal blending of blues roots with some of the new energy taking place on the Bay Area scene in the 60s – that great "old is new" approach that worked wonderfully for a few key groups – especially those like Canned Heat, who were committed to bringing plenty of their own styles into play! Sure, the music is blues – but there's a lot more flavors and styles going on here – acoustic guitar used alongside fuzzier electric, in a blend of country and city blues – but also taken to some trippier touches that reflect the psychedelic era that spawned them! Tracks are spare and simpler than on later albums, but already showing the group's distinction – on titles that include "Big Road Blues", "Help Me", "Dust My Broom", "Catfish Blues", "Rollin & Tumblin", "Goin' Down Slow", and "Evil Is Going On". Boogie With Canned Heat is the record that really broke Canned Heat out of the pack – still plenty bluesy, but with the trippier touches you might guess from the cover's psychedelic image – a perfect summation of that unique placement the group had on the late 60s Cali scene! The record's the one that gave the world the landmark "On The Road Again" – a tune used in countless films and commercials over the years, and graced with the completely unique vocals of Bob Hite – a singer who doesn't care if he sounds authentic, and who's more than happy enough to bring his own spirit to the music! That statement also defines the rest of the group too – as they let loose on titles that include "World In A Jug", "My Crime", "An Owl Song", "Fried Hockey Boogie", "Amphetamine Annie", "Whiskey Headed Woman No 2", and "Turpentine Moan".  © 1996-2023, Dusty Groove, Inc.