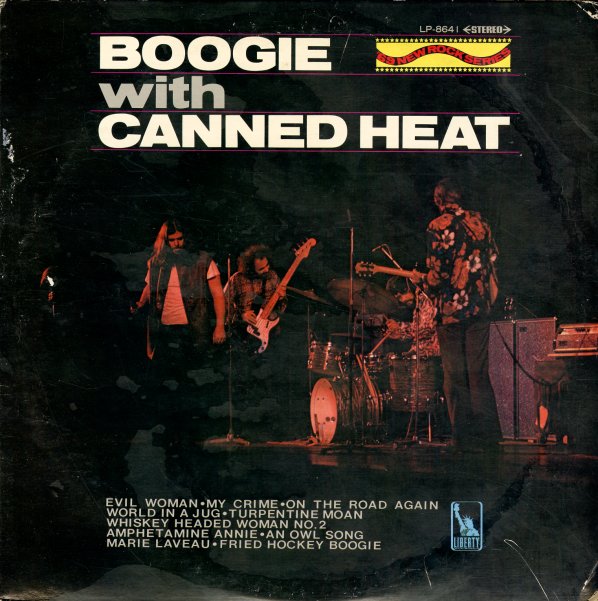 The record that really broke Canned Heat out of the pack – still plenty bluesy, but with the trippier touches you might guess from the cover's psychedelic image – a perfect summation of that unique placement the group had on the late 60s Cali scene! The record's the one that gave the world the landmark "On The Road Again" – a tune used in countless films and commercials over the years, and graced with the completely unique vocals of Bob Hite – a singer who doesn't care if he sounds authentic, and who's more than happy enough to bring his own spirit to the music! That statement also defines the rest of the group too – as they let loose on titles that include "World In A Jug", "My Crime", "An Owl Song", "Fried Hockey Boogie", "Amphetamine Annie", "Whiskey Headed Woman No 2", and "Turpentine Moan".  © 1996-2022, Dusty Groove, Inc.
(Japanese pressing on red vinyl, including lyric insert. Cover has some staining on the back- due to moisture, with light edge and surface wear, small split up top.)

Spaceship Earth
Liberty, 1970. Very Good+ Gatefold
LP...$16.99 (CD...$18.99)
The searing second album from Sugarloaf – a set that has Jerry Corbetta wailing even more heavily on the organ than before, and the group working with the kind of razor-sharp intensity that made them such a big act at the time! Corbetta also handles most of the lead vocals, but the group ... LP, Vinyl record album

Sugarloaf
Liberty, Late 60s. Very Good+ Gatefold
LP...$14.99
A fantastic debut from Sugarloaf – a group who managed to use the Hammond organ in ways that were just as strong as the guitar in most other groups! The approach here seems to draw a lot from all the best changes taking place in soulful jazz – as Jerry Corbetta manages his keyboards ... LP, Vinyl record album