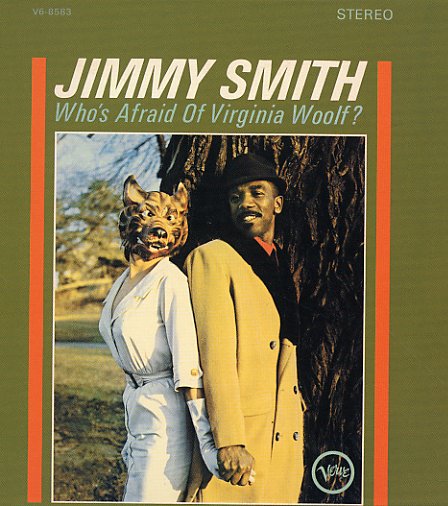 A real treasure, and a record that may well be our favorite Jimmy Smith album for Verve – a masterful meeting of his smoking Hammond work with some swingingly sophisticated arrangements by Oliver Nelson and Claus Ogerman! Both Nelson and Ogerman bring a fuller spectrum of horn work to the album than heard on other Smith sides of the time – using an almost orchestral approach to the backings, one that pushes Jimmy even further into the stratosphere as he solos madly on the organ! But don't think that the larger backings are clunky at all – because they're not – and there's a surprisingly deep soul to all the proceedings on the album, making it one of the tightest, grooviest, and deeply soulful records that Jimmy cut after leaving Blue Note! The LP includes two very long cuts – killer versions of "Who's Afraid Of Virginia Wolf" and "Slaughter On 10th Avenue" – plus shorter takes on "Bluesette", "Women Of The World", and "Wives & Lovers" that are all plenty amazing too!  © 1996-2023, Dusty Groove, Inc.
(Stereo MGM pressing, including Verve inner sleeve. Cover has light wear, but is nice overall.)

Stan Getz & JJ Johnson At The Opera House
Verve, 1957. Very Good+
LP...$19.99
A strange pairing – but that's sometimes what makes these Verve "pro meets pro" sets from the 50s so great. Getz and Johnson are backed by Oscar Peterson, Ray Brown, Herb Ellis, and Connie Kay – and the tracks are longish, with plenty of solo room in the open jam session mode ... LP, Vinyl record album