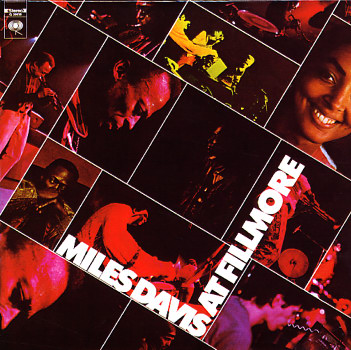 Four sides of long improvised grooves from Miles Davis – a set that's quite similar to the classic studio album Bitches Brew, but which captures the sound in more open live setting! Each track on each side is named "Wednesday Miles", "Thursday Miles", and so on – after the night it was recorded – and is one of the few documents of the Miles electric group that features Chick Corea on keyboards, Steve Grossman on saxes, Dave Holland on bass, Jack DeJohnette on drums, and Airto on percussion. The work is more inside than some of the Davis Japanese sessions of the time, but no less revolutionary – really opening up in some wonderful ways – with lots of spacious modal riffing over some heavy vamps. Groovy and quite free at the same time, but not nearly as out as the later electric recordings!  © 1996-2022, Dusty Groove, Inc.
(Original pressing. Cover has a small split on the top seam and some surface wear.)