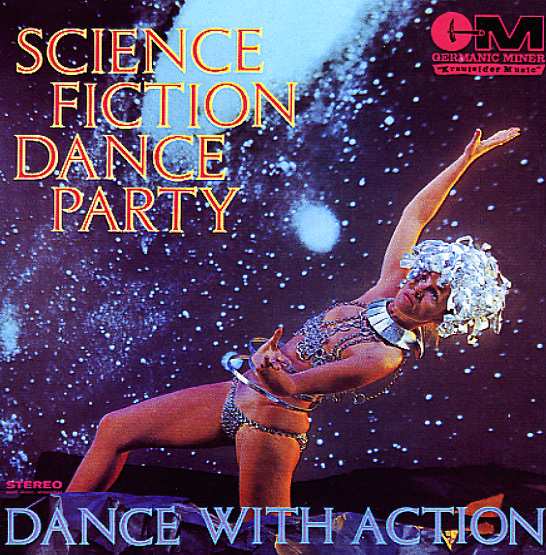 A really amazing record – even more incredible than you might guess from the cover and title! The whole thing's definitely a "party" in sound – as the record takes lots of familiar instrumentation and mixes it with odd sound effects and weird production tricks – creating a space age vibe that's totally incredible, and pretty darn groovy as well! Things are very upbeat, and playful – and the whole thing's got a feel that's very similar to some of the late 60s sci fi grooves of Peter Thomas, most notably his excellent Raumpatrouille soundtrack. Organ mixes with fuzzy guitar, electronics, rattling percussion, and heavy basslines – then the whole thing's layered with lots and lots of echo and studio tricks – with occasional spoken or sung vocals that heighten the mood of the tunes, yet still leave things in a mostly instrumental mode. Most tracks are pretty darn funky – in an offbeat way – and the sound of the whole thing is completely mindblowing – handled by the same guys who did the Vampires Of Dartmoor record! Titles include "Visitors Of AD 2022", "The End Of A Robot", "Flirtation On Venus", "Dance On Mars", "Man Out Of A Test Tube", "Death Rays Out Of The Universe", and "The Whistling Astronaut".  © 1996-2022, Dusty Groove, Inc.

Dracula's Music Cabinet
Metronome/Finders Keepers (UK), 1969. New Copy
LP...$24.99 28.99
A groovy German treasure from the late 60s – a sublime little set we'd rank right up there with the legendary Vampyros Lesbos for pure musical genius! Despite the appearance of a group on the album's cover, the music's all made by a couple of studio cats – Horst Ackermann and Heribert ... LP, Vinyl record album