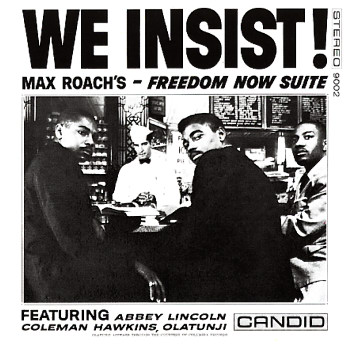 One of the most righteous albums that Max Roach ever cut – and a monumental jazz release from the heart of the Civil Rights era! As you can guess from the cover and title, there's a very political bent to the record – served up in righteous lyrics penned by Oscar Brand Jr, and sung by Abbey Lincoln at her most biting – really stepping out here in just a few short years from her previous role as a straight jazz singer, and firmly grabbing up territory no other female vocalists had touched! For this momentous event, Roach gathered together a really special group for the record – players who include regular partners Booker Little on trumpet and Julian Priester on trombone – alongside surprising guests like Coleman Hawkins on tenor sax, Olatunji on percussion, and Ray Mantilla on congas. There's no piano at all on the record, and the tracks are all long ones – stretching out with soaring horn passages next to the vocals, and plenty of percussion at the bottom to get things moving! Titles include "Driva' Man", "Tears for Johannesburg", "Freedom Day", "All Africa", and "Prayer/Protest/Peace".  © 1996-2022, Dusty Groove, Inc.