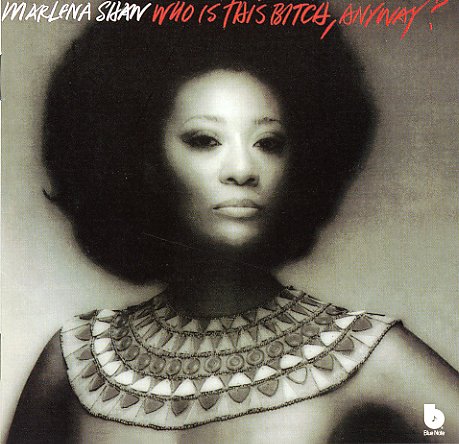 Who Is This Bitch, Anyway?

A great record from the mid 70s – one that has Marlena Shaw further developing her style as a sophisticated soul diva with a sharp modern edge! Although already great in the 60s, Shaw emerges here as an all-adult, all-woman singer – dealing with issues that never would have gotten touched in the decade before, all with a directness and sensitivity that's totally great. A great example of this is the leadoff track "You Me & Ethel" – a hilarious monologue in which Marlena strings along some guy who's trying to pick her up in a bar – really holding it in until it launches into the jazz funk groover "Street Walkin' Woman"! Arrangements throughout the album shift from mellower soul to hipper jazz with ease – taking Shaw into a wide range of territory that clearly shows that no areas were off limits to an artist of her stature in the 70s! Tracks include "Feel Like Makin Love", "You", "You Been Away Too Long", and "Loving You Was Like A Party".  © 1996-2022, Dusty Groove, Inc.
(Cover has a partial split on top & bottom, light surface wear.)

Platinum Jazz
Blue Note, 1977. Very Good 2LP Gatefold
LP...$6.99
Sweet jazzy work from War – a record that has them stretching things out a bit from before, and finding new ways to groove for the second half of the 70s! All the core elements are still firmly in place – that sublime blend of jazz, soul, funk, and Latin elements – but there's a ... LP, Vinyl record album