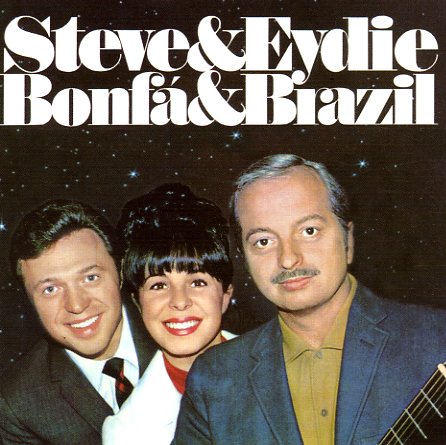 Very groovy Brazilian work – in a similar vein to Eydie's Blame It On the Bossa Nova LP! Stevie & Eydie recorded this set with bossa guitarist Luiz Bonfa, and Deodato did the arrangements – and they both really bring in a beautiful sound to the set that's quite unlike other Gorme/Lawrence albums from the time. The bossa is twisted beautifully through the twisted relations of Steve & Eydie, and the track list features a number of English versions of tracks that you'd probably recognize better in the Portugese versions. Cuts include "Empty Glass", "Sweet Talk", "Dream My Dream", and "Summer, Summer Wind".  © 1996-2022, Dusty Groove, Inc.
(360 Sound stereo pressing. Cover has light wear, aging, and a small split in the bottom seam.)

Heavenly (Original Master Recording)
Columbia/Mobile Fidelity, 1959. Near Mint-
LP...$44.99
Heavenly vocals from the great Johnny Mathis – not a gospel set, but one in which he floats to the clouds on lush orchestrations from Glenn Osser! LP, Vinyl record album

Johnny Mathis Sings The Music Of Bacharach & Kaempfert
Columbia, 1970. Near Mint- 2LP Gatefold
LP...$4.99
Johnny Mathis sings the music of two guys named Burt – or Bert, depending on the situation – American pop genius Burt Bacharach, and German easy maestro Bert Kaempfert – both of whom were huge musical forces in the 60s! The album begins with a full set of Kaempfert tunes – ... LP, Vinyl record album

Lots Of Love
Columbia (Japan), 1975. Near Mint-
LP...$29.99
With arrangements and accompaniment on piano and keyboards by Yuji Ohno, with Kiyoshi Sugimoto on guitar, Tadaomi Anai on percussion, and Ken Muraoka on tenor. LP, Vinyl record album

I Only Have Eyes For You
Columbia, 1976. Very Good
LP...$0.99
Johnny Mathis really opened up his sound in the 70s – still holding onto the majesty of his vocals from the early years, but really finding a new sort of groove with arranger Gene Page! Page had done funkier work in other settings, but here he mixes up soul and strings in a nice balance of ... LP, Vinyl record album