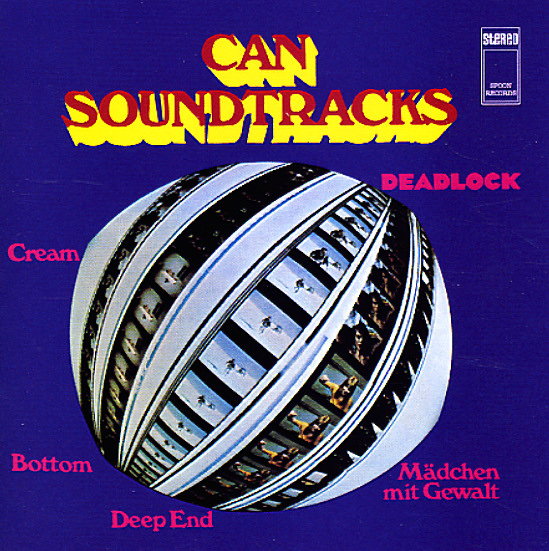 The second album from Can – and one that the group maybe likes to think of as more of a bridge between Monster Movie and Tago Mago – tracks done for a variety of film projects, but which also still really show the quick evolution of the group at the time! Some of the work still features original singer Malcolm Mooney, and others feature the new rising star of Damo Suzuki – but what might be most striking here is the drum work of Jaki Liebezeit, who already seems to be pushing forward with that rhythmic pulse that would soon make the early 70s Can so amazing – recorded with stark brilliance and blended with edgey percussion, at a level that makes most of the tracks unlike anything else the world had ever heard before! Of course, there's still plenty of tremendous bass from Holger Czukay, guitar from Michael Karoli, and keyboards from Irmin Schmidt – all of whom sound amazing here – on titles that include "Mother Sky", "Deadlock", "Tango Whiskeyman", "Don't Turn The Lights On Leave Me Alone", "Soul Desert", and "She Brings The Rain".  © 1996-2022, Dusty Groove, Inc.
(Limited edition on clear purple vinyl and with download!)

200 Motels (180 gram pressing)
United Artists/Zappa, 1971. New Copy 2LP Gatefold
LP...$31.99 35.99 (CD...$11.99)
A pretty striking little record in the Frank Zappa catalog – the double-length soundtrack for the movie of the same name, and a set that explodes the Zappa palette of sound even further than some of his previous albums! A number of tracks feature a full studio orchestra – sounding as ... LP, Vinyl record album