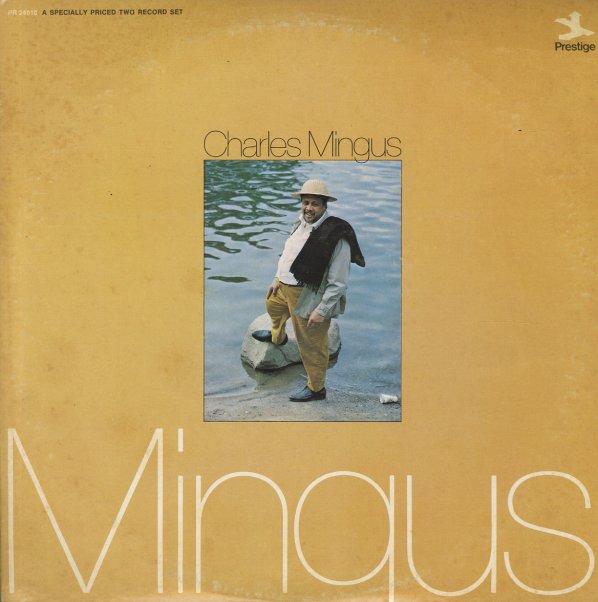 An excellent double LP that brings together a stellar selection of Charles Mingus' best Debut Records sides from the early 50s – most of which are very hard to find on wax these days! This is the material that gave birth to the legend that would flower on Atlantic and Columbia Records a few years later – and Charles already shows his genius for picking players – working here with Mal Waldron on piano, Eddie Bert on trombone, Max Roach on drums, and Willie Jones on alto! The package has great notes, too – and titles include "Haitian Fight Song", "All the Things You Can C Sharp", "Percussion Discussion", "Work Song", "Ladybird", "Love Chant", "Jump Monk", "Septemberly", "A Foggy Day", and "Love Chant".  © 1996-2022, Dusty Groove, Inc.
(70s pressing. Cover is in great shape, but is slightly mis-aligned at the opening.)

Jazz History Vol 19 – Charles Mingus (Jazz Experiments Of Charlie Mingus/Modern Jazz Symposium)
Bethlehem/Polydor (Germany), 1954. Near Mint- 2LP
LP...$24.99
Two classic 50s albums from Charles Mingus – both recorded for the Bethlehem label, and issued here in an import-only pressing! First up is Jazz Experiments – a pivotal album in the career of Charles Mingus – one that really has him honing his sound, and reaching for that ... LP, Vinyl record album

Something Like A Bird
Atlantic, 1978. Near Mint-
LP...$19.99
One of the last albums Charles Mingus ever gave us – before departing this planet way way too soon! The set shows the increasing sophistication of Mingus' music in these later years – a mode that almost echoes the path that Duke Ellington would take in his final decade – a move ... LP, Vinyl record album

Me Myself An Eye
Atlantic, 1979. Near Mint-
LP...$14.99
Complicated later work from Charles Mingus – a great illustration of the way his power to command a large ensemble never wavered as the years went on! The album features two different large groups of players – filled with modernists young and old – including Ricky Ford, George ... LP, Vinyl record album

Mingus Ah Um
Columbia, 1959. Very Good+
LP...$59.99 (CD...$11.99)
One of Charles Mingus' true classics – and an essential album in any jazz collection! This 1959 gem was recorded by Mingus at a key point in his career – when he was rising from the jazz underground into the ranks of America's elite jazzmen, penning some of the most challenging work of ... LP, Vinyl record album