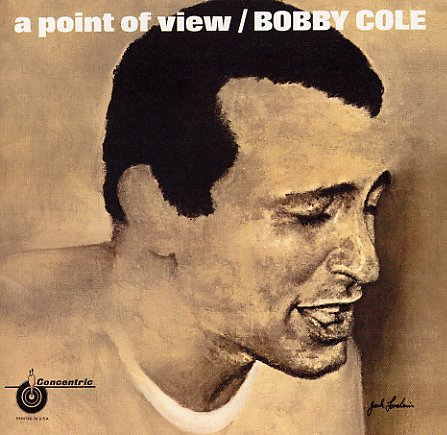 Also available
Bobby Cole — Point Of View (with bonus download) ... LP 28.99
An incredible treasure from a lost vocal jazz genius – the little-known Bobby Cole, every bit as great a singer as he was a songwriter, very unusual for the time! Bobby was probably best remembered as the house pianist at Jillys, but at the time of this 1964 recording, he was poised to emerge as a serious vocalist with a rich talent for penning interesting and witty little tunes. The album's got Bobby singing in a style that's halfway between Matt Dennis and Mark Murphy – with the sophisticated talents of both in place, and perhaps a bit of the wit of Bob Dorough or Roy Kral. The original album features Bobby on piano and vocals, with only bass and drums behind him – and titles include "You Can't Build A Life On A Look", "Heat", "You Could Hear A Pin Drop", "Change Of Scene", "A Perfect Day", "Elegy For Eve", and "Status Quo". CD features 13 unissued bonus tracks too – different than the ones that were on the previous Japanese CD release – great titles with a similar vibe, including "Checkerboard Life", "Drink This Cup", "Never Ask The Hour", "A Toast", and "When She Was In Love With Me".  © 1996-2022, Dusty Groove, Inc.