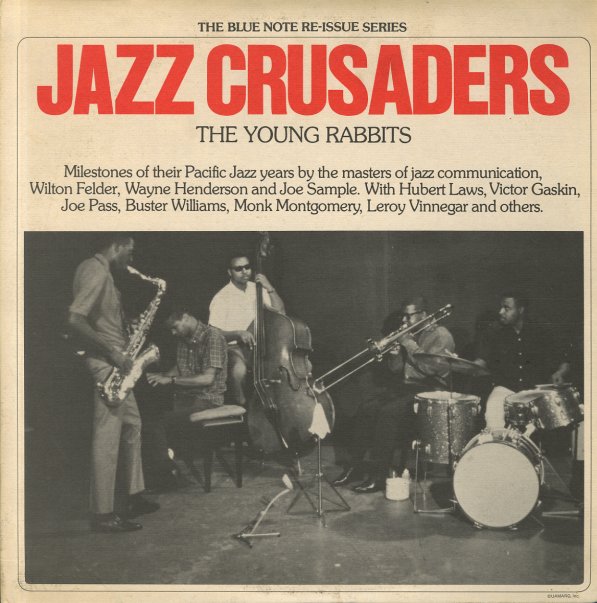 A great collection of early work from this razor-sharp group – the young Texas-bred lineup that features Wilton Felder on tenor and alto, Wayne Henderson on trombone, Joe Sample on piano, and Stix Hooper on drums – all grooving hard in the years before they just became The Crusaders! The vibe is great – a west coast take on territory that Prestige was exploring at the time – and the group works with guests who include Buster Williams on bass, Clare Fischer on organ, and Hubert Laws on flute. Lots of nice tracks, too – including "Congolese Sermon", "Blues Up Tight", "Big Hunk Of Funk", "Appointment In Ghana", and "Fire Water". Good notes, too, with a very long history of the band.  © 1996-2022, Dusty Groove, Inc.
(Cover has minor seam splits, light surface wear, small sticker remnant.)

Best Of The Jazz Crusaders
Pacific Jazz, 1960s. Very Good+
LP...$2.99 6.99
A sweet little set of some of the Jazz Crusaders' best sides from the 60s – a hip swinging selection of short, tight, and very well played soul jazz numbers – grooving hard in a way that was very big with the jukebox and jazz AM crowd! The set list features a good mix of originals and ... LP, Vinyl record album

Dexter Gordon (aka Dexter Calling)
Blue Note/Up Front, 1961. Sealed
LP...$16.99
This isn't one of those "phoned in" sessions that seem to turn up way too much in contemporary jazz! The album's a real classic from Dexter's first big "comeback" period – and represents the strength of his Blue Note years at their best! Gordon's rich, full tone isn't ... LP, Vinyl record album