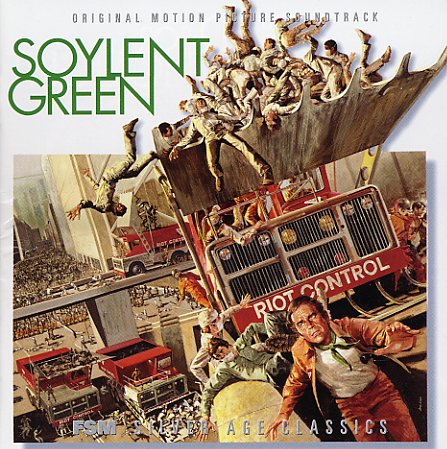 A pair of soundtracks for two of the creepiest horror movies of the 70s – back to back on a single CD, and given the top-shelf Film Score Monthly treatment! First up is the score for Soylent Green – a mix of very moody, unusually-toned passages that are mixed with some mellower, jazzier numbers that offset things nicely – composed by Fred Myrow, but also given a bit of help from horror maestro Gerald Fried! The music is definitely above the norm – not just in the higher budget, but also in the way that things come together sonically – at a level that makes for a lot of surprises throughout – on titles that include "Tab's Pad/Furniture Party", "Shirl & Thorn", "Home Lobby Source", "Can I Do Something For You", and "Sol's Music". Demon Seed is a great one from Jerry Fielding – definitely at the darker side of his sonic spectrum, which is pretty darn fitting, given that the film involves a computer having sex with Julie Christie! There's a sense of evil that resonates in the music right from the start – a mode that's partially borrowed from the Italian giallo generation, but which is given a more varied approach here, often at a level that's very low in the sonic spectrum. Tracks include "Birth Scene", "Probed Or Put To Bed", "Last Voyage", and "Closing Crawl". CD features almost 80 minutes of music – and detailed notes on both scores!  © 1996-2022, Dusty Groove, Inc.