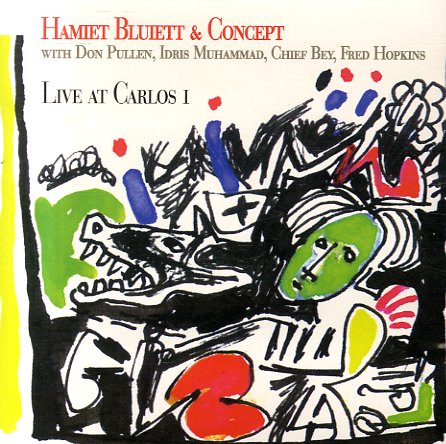 Live At Carlos I

A really hard-burning live session – recorded in the 90s, but with all the bite and fire of some of the best Hamiet Bluiett sessions from the previous decade! There's a long-spun, spiritual vibe going on here – tracks that use familiar instrumentation, but really find a way to soar – never going too outside, but definitely pushing the boundaries – as Hamiet's baritone saxophone soars next to the piano of Don Pullen, bass of Fred Hopkins, and drums of Idris Muhammad – all given an extra kick by percussion from Chief Bey! Titles include "Nali Kola", "Full Deep & Mellow", "Oleo", "Night In Tunisia", and "The Mighty Denn".  © 1996-2022, Dusty Groove, Inc.

Misty Red
Timeless/Ultra Vybe (Japan), 1982. New Copy
CD...$13.99 14.99
A great later session from pianist Red Garland – recorded in the early 80s with support from Ahmad Jamal's old trio-mates – Jamil Nassar on bass and Frank Gant on drums! The Garland heard here is a gentler one than on his earlier recordings – playing with a nice Jamal-like sense ... CD