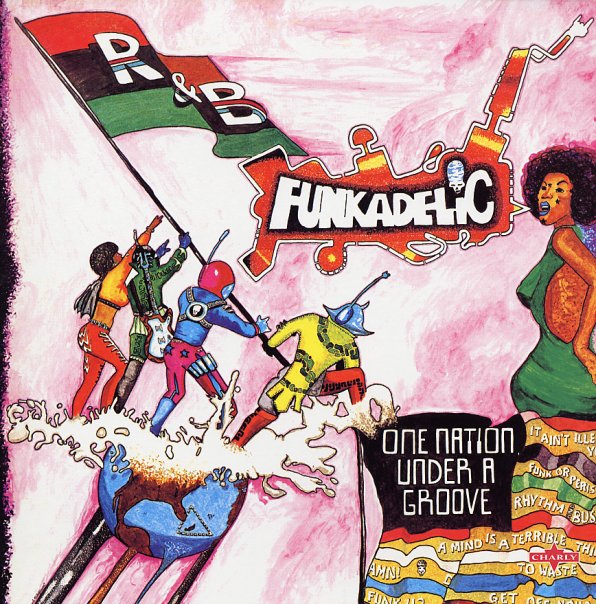 An instant classic the day it was released – and a perfect blending of the group's older freaked-out style with a slick late 70s funk sound that started showing up in the work of many other groups. "One Nation Under A Groove" is a monster cut with a hook that won't quit, and the LP version runs way over 7 minutes long. Other tracks are equally great, and the whole thing's woven together with the same sort of skill as some of the best Parliament albums from the mid 70s. Tracks include "Into You", "Grooveallegiance", and "Cholly".  © 1996-2023, Dusty Groove, Inc.
(Original beige label pressing. Includes the bonus 7" single and printed inner sleeve! Cover has a cutout notch, minimal wear. Label has some marker.)

Purple Rain
Warner, 1984. Very Good+
LP...$19.99 (CD...$2.99, LP)
One of the greatest crossover albums of the 80s – and the record that catapulted Prince very firmly into the mainstream! There's a tightness here that surpasses even that of Prince's early classics for Warner Brothers – an unabashed love of a pop hook that makes for some incredibly ... LP, Vinyl record album

Performance
Warner, 1981. Very Good+ 2LP Gatefold
LP...$3.99
An expanded double-length set from Ashford & Simpson – one that features three sides of live material, plus some great studio work as well! The concert material makes up the core of the album – a really wonderful demonstration of the genius of Nick and Valerie away from the studio ... LP, Vinyl record album

Ain't That Good News
RCA, 1964. Near Mint-
LP...$24.99
Good news galore from the great Sam Cooke – maybe THE album in which he fully shows off his unique contribution to soul music in the 60s – that mix of raw and sweet, easygoing and progressive – a mode that had a huge impact at the time, and went onto become a strong influence for ... LP, Vinyl record album