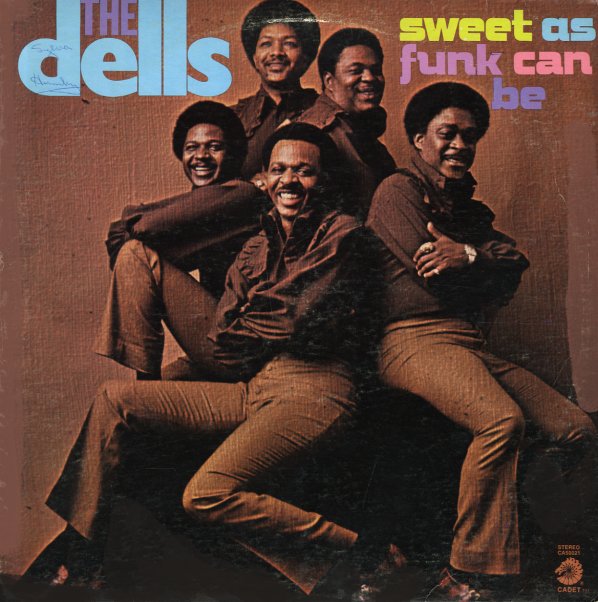 A wonderful record from the Dells – with stellar Cadet production and arrangements by Charles Stepney! This one has a very cool way of putting the tracks together, so that there's these little "segues" in between each cut – short instrumental grooves that are actually quite funky. The full-length tracks are incredible, naturally, and feature the swirling soul style that often worked best with The Dells' majestic vocals, but which also has a bit of a Temptations-ish heavy soul groove at times. Nearly every cut was written by Terry Callier and Larry Wade – and tracks include "Windy City Soul", "Funky Breeze/Ghetto Scene", "Sweet As Funk Can Be", "Origin Of Funk", and "Be Bop Breeze".  © 1996-2021, Dusty Groove, Inc.
(Cover has some edge wear and lightly bent corners.)

Hey Love
Cadet, 1971. Near Mint-
LP...$11.99
A massively beautiful piece of work by "the new Rotary Connection" – a version of this groundbreaking Chicago soul ensemble which featured Phil Upchurch, Henry Gibson, and Charles Stepney – the cream of the Chicago production scene! Minnie Riperton's still in the band on ... LP, Vinyl record album

Paint It Black
Cadet, 1966. Very Good+
LP...$14.99
One of the better albums by this great Chicago soul studio group – but all of them are pretty nice! The great Richard Evans is still at the head of The Strings, and the album features solo work by Charles Stepney and Lennie Druss, in a cool breezy Chess/Cadet soul jazz kind of mode. The ... LP, Vinyl record album

Hot Property
Epic, 1979. Near Mint-
LP...$7.99
Man, these guys never seem to miss – and always come up with some great little tunes that snap along in a really compelling way! This album might be easy to overlook in favor of the band's bigger classics, but it's a stone winner all the way through – with a number of tunes that groove ... LP, Vinyl record album