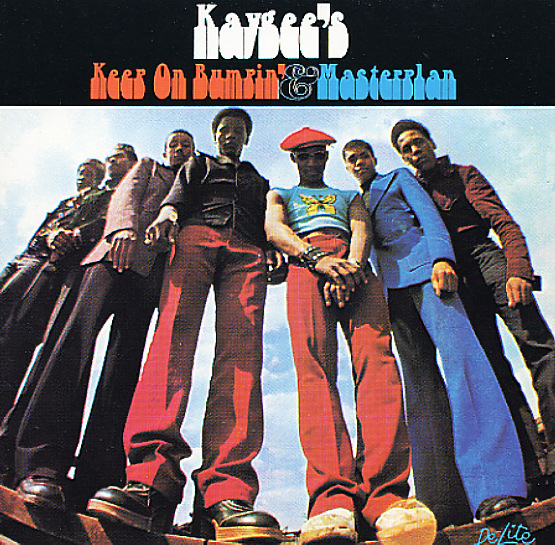 Also available
Kay-Gees — Keep On Bumpin' & Masterplan ... LP 11.99
The Kay-Gees' funkiest record ever – a set that's harder and sharper than anything else they'd ever record in years to come! Grabbing this one up is like finding a lost Kool & The Gang album from the early years – which is no surprise, since Ronald Bell of the group produced, and wrote a lot of the songs with the group – maybe acting as their mentor, and definitely giving the young group a great showcase for their boundless energy, and tight skills in the groove department! The band are incredibly tight – with lots of hard drums, choppy guitar, and the rolling party feel that made Kool & The Gang so great during their best years – captured here with a similarly raw production style. There's some great horns that blast in and out, sounding very off-beat at the best moments – like the classic "Who's the Man With the Master Plan", sampled by YZ many years ago – or other funky cuts like "Ain't No Time", "Get Down", and "You've Got to Keep on Bumpin". CD features bonus tracks – the unreleased instrumental "Let's Boogie", the unreleased disco version of "My Favorite Song", and the tracks "You've Got To Keep On Bumpin (parts 1 & 2)", "Hustle Wit Every Muscle (orig single)", and "Hustle Wit Every Muscle (disco version – original single)".  © 1996-2022, Dusty Groove, Inc.