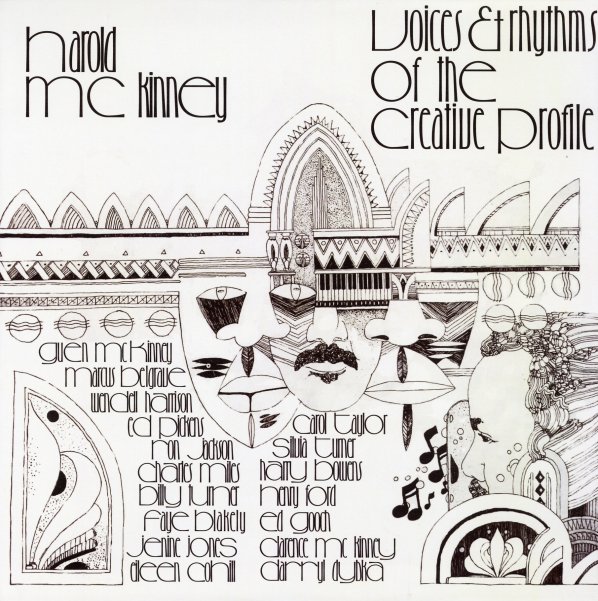 Voices & Rhythms Of The Creative Profile

One of the most righteous albums ever issued by the always-righteous Tribe Records label of Detroit – a really collective effort, one that features ensemble vocals and spiritual jazz – all pulled together by pianist Harold McKinney! The album showcases a group named Voices Of The Creative Profile – formed by McKinney to accompany his Creative Profile instrumental group – and the overall style is a great blend of spiritual soul jazz that gives equal time to the voices and instruments in the set. Gwen McKinney heads up the vocal ensemble, and other players on the set include Wendell Harrison on flute, Marcus Belgrave on trumpet, Billy Turner on percussion, and Ed Pickins on bass. Also features some cool moog from Darryl Dybka – and titles that include "In The Moog", "Freedom Jazz Dance", "Dolphin Dance", "Heavenese", "Ode To Africa", "Out Of The Blues", and "Cornerstone".  © 1996-2022, Dusty Groove, Inc.
(A great pressing – comes with a heavy oversized booklet that includes the history of Tribe Records!)

Peace In The World/Creator Spaces (with bonus download)
Cosmic/Now Again, 1974. New Copy 2LP Gatefold (reissue)
LP...$49.99 55.98
An amazing package – a pair of rare avant jazz albums, presented here together! The first album is Peace In The World – maybe the only album issued under the name of Michael Cosmic – but a set that's part of a key legacy with his brother, reedman Phill Musra! The set has Cosmic ... LP, Vinyl record album

Get Up Off Your Knees (180 gram pressing)
Tribe/Pure Pleasure (UK), 2021. New Copy 2LP Gatefold
LP...$34.99 59.99
Fantastic new music from Detroit reedman Wendell Harrison – working here with a renewed version of the Tribe Records scene, at a level that makes the album one of his best in many years! Wendell blows tenor and bass clarinet, and his group here is mostly younger, lesser-known players – ... LP, Vinyl record album