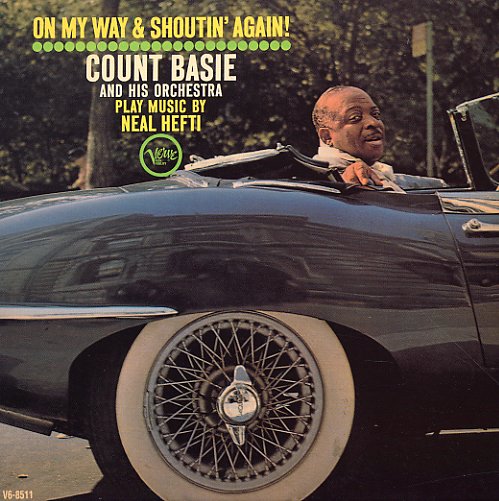 On My Way & Shoutin Again is a wonderful album of 60s Basie – one that focuses on the writing and arranging talents of the great Neal Hefti! Hefti's one of our favorite soundtrack composers of the decade, but in the years before his film fame, he was a frequent partner of Basie – and this album marks one of their greatest collaborations together. The tunes are very much in the "loud, then soft, then loud" mode that Hefti pioneered with Basie's angular group of the 50s – but they've also got some of the warmer, more whimsical touches that Neal would explore more fully in his later soundtrack work too. The result is a classic Basie session, but with plenty of surprises – featuring a fresh batch of tunes that includes "Jump For Johnny", "Ducky Bumps", "Rose Bud", "Shanghaied", "Together Again", and "Eee Dee". Not Now I'll Tell You When is a great title for this classic Count Basie album – as it really gets at the tight, focused direction that makes Basie so great at this point in his career – his way of singling out each and every instrumentalist, and perfectly timing their performances! The sense of rhythm is what makes the Basie group so different from so many other large ensembles – not big band swing, not tonal modern, but this rootsy, soulful style at the bottom – even when the instrumentation is impeccable – that undeniable groove that makes a record like this swing from the start, then keep on going strongly, even when lots of colors and tones come into the mix. The whole lineup's great – and players include Frank Wess on flute, Frank Foster on tenor, Thad Jones on trumpet, and Freddie Green on guitar – and the album features a lot of sweet originals that really keep things interesting – including "The Daly Jump", "Not Now I'll Tell You When", "Rare Butterfly", "Back To The Apple", "Blue On Blue", and "Swingin At The Waldorf".  © 1996-2022, Dusty Groove, Inc.

Play The Music Of Benny Carter – Kansas City Suite & The Legend
Fresh Sound (Spain), Early 60s. Used
CD...$11.99
A great little set – despite our initial fears! We'll admit that we're the first ones to shy away from anything that says "Kansas City" in the title – as we expect a lot of hoke – but this album's a surprisingly great batch of tunes, original numbers written by Benny ... CD

April In Paris
Verve/Polygram, 1955. Used
CD...$4.99
One of Basie's biggest albums – but still a work of pure genius! "April In Paris" is one of the darkest jazz standards ever written, and it never sounded better than in this original version, which features that great ending in which Basie and the band stop, then start, then stop ... CD