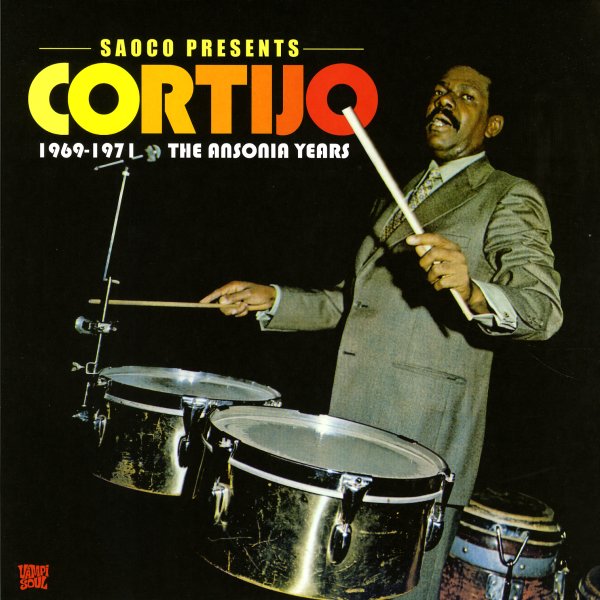 Also available
Cortijo — Ansonia Years – 1969 to 1971 ... CD 9.99
Some of the best work ever from Puerto Rican percussionist Rafael Cortijo Verdejo – sides recorded in New York for the Ansonia label, at a time when Cortijo's music was even more rootsy than it was a decade before! The material here marks a renewed sense of tradition in players of Cortijo's generation – almost a back-to-basics mode that was their answer to the hybrids of the late 60s – a style that often has Rafael focusing even more on the rhythms at the bottom of the tracks, and leaving behind some of the fuller orchestrations of the 50s. The mighty Kako joins in on percussion on a number of tracks too – and singers include Chivirico Davila and Johnny Vega – on titles that include "Chiviriquiton", "Tele Tele Ya", "La Madama", "Que Linda Te Ves", "Tu Y Tu Guarapo", "Quien Fuel El Primero", "Echando Un Pie", "Alegria Bomba Es", "Dorotea", "Dudando", and "El Negrito Bailador". Comes with great notes in Spanish and English, too!  © 1996-2022, Dusty Groove, Inc.
(Spine has a small index sticker.)

Bamboleate
Tico/Vampi Soul (Spain), 1967. Used
CD...$18.99
An incredible collaboration between pianist Eddie Palmieri and vibist Cal Tajder – a record done for Tico in answer to their previous session for Verve – and a set that's even harder-jamming overall! Cal and Eddie really find something special together on the record – and both ... CD