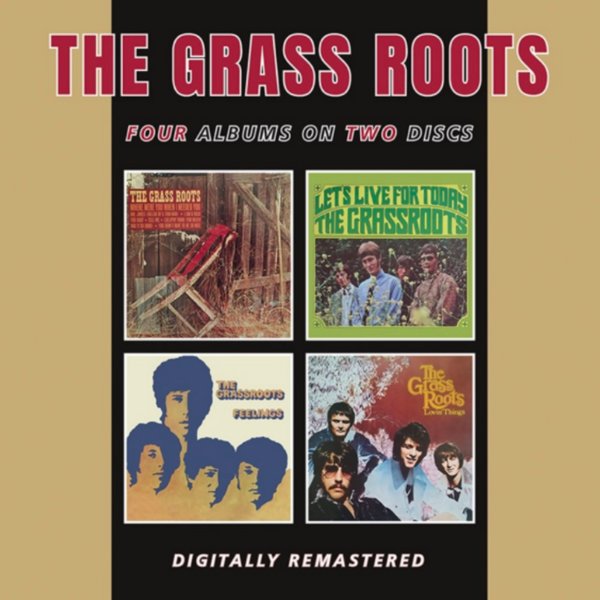 A four-pack of albums from this seminal group – all brought together in a single set! Where Were You is a seminal set from the Sunset Strip scene of the 60s – and just the kind of record that shows why the changes taking place in Cali were so important to the growth of so much other music at the time! A few years before, and The Grass Roots would have been a pop folk combo re-tuning traditional tracks for the coffeehouse scene – but here they're taking off with some post-folk modes that are partly sunshine pop, partly the headier currents that were the darker side of the west coast – all put together with superb production by PF Sloan and Steve Barri – who also penned some of the best tunes on the record. Titles include the great "Where Were You When I Needed You" – plus "Only When You're Lonely", "Look Out Girl", "Ain't That Loving You Baby", "I've Got No More To Say", "I Am A Rock", "Tell Me", and "Mr Jones". Let's Live For Today is maybe the most famous record ever given to the world by California quartet The Grass Roots – famous for its title tune, and for the way that it effortlessly blends together folk inclinations and psych inspirations! The record's definitely one of those that showed the world that there was something new in the air at the time – put together with perfect production in the studio from Steve Barri and PF Sloan – who are in territory that's somewhere between the best from Brian Wilson and Abbey Road Studios – but a bit more understated than both! Titles include the classic "Let's Live For Today" – plus "Things I Should Have Said", "Wake Up Wake Up", "No Exit", "This Precious Time", "House Of Stone", "Is It Any Wonder", and "Tip Of My Tongue". Feelings is a great departure for The Grass Roots – a set that has the group taking a stronger role overall in the instrumentation and songwriting on the record – at a level that makes the whole thing a fabulous extension of all the genius they'd given the world on previous sets! There's still that cool blend of post-folk and psychedelic elements taking place here – gently swirled together with acoustic and electric guitars setting the tunes up just right – all with a late 60s Cali vibe that's as great today as when it was recorded. Titles include "The Sins Of A Family Fall On The Daughter", "Melody For You", "You Might As Well Go My Way", "Dinner For Eight", "Good Things Come To An End", "You & Love Are The Same", and "Hey Friend".  © 1996-2023, Dusty Groove, Inc.