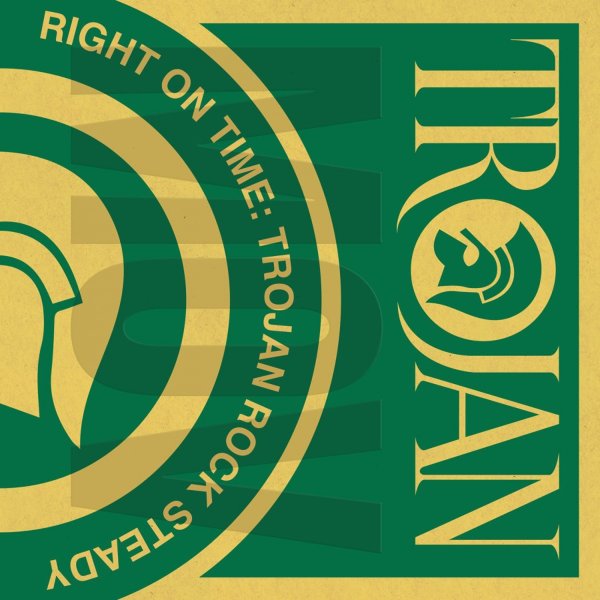 A really excellent collection of rocksteady work on Trojan Records – material that's much more expansive than some of the more hit-based sets of this type on the market – in a way that really draws a firm line between the roots of ska and the early days of reggae! There's a lot of tracks here that aren't easy to find otherwise, mixed with others from some of the key Jamaican singers of the moment – served up in two dozen tracks that include "Revival" by Leslie Butler & The Originals Orchestra, "Right On Time" by The Sensations, "She Said She Loves Me" by The Sealmates, "Can't See You" by Ken Boothe, "Reborn" by The Maytals, "Over Again" by Stranger & Gladdy, "Be Mine" by The Rulers, "One Scotch One Bourbon One Beer" by Alfred Brown, "Miss Anti Social" by Austin Fairchild & The Hippies, "Give Me That Love" by Nehmiah Reid, "The Shadow Of Your Smile" by Tommy McCook & The Supersonics, "You've Got Something" by Ewan & Jerry, and "So Nice Like Rice" by Charley Kelly.  © 1996-2023, Dusty Groove, Inc.

Skatalites – Essential Artist Collection (clear vinyl pressing)
Trojan, Mid 60s. New Copy 2LP Gatefold
LP...$34.99 35.98 (CD...$18.99)
The Skatalites are a group who were one of the key forces in Jamaican music in the 60s – a crack ensemble of musicians who really helped the scene in Kingston break strongly from other Caribbean cities at the time – finding a groove that would forever set the path towards rocksteady and ... LP, Vinyl record album

Maytals – Essential Artist Collection (yellow vinyl pressing)
Trojan, Late 60s/Early 70s. New Copy 2LP Gatefold
LP...$34.99 35.98 (CD...$18.99)
Definite essential work from The Maytals – the legendary group led by Toots Hibbert, and who really helped transform the sound of Jamaican music with recordings like this! There were certainly other soulful groups in their generation on the Kingston scene, but The Maytals really helped give ... LP, Vinyl record album

Reggay At Its Best (180 gram orange vinyl pressing)
Trojan/Music On Vinyl (Netherlands), Late 60s. New Copy (reissue)
LP...$27.99 29.99
A fantastic showcase for the tenor talents of Tommy McCook – the saxophonist who was as important to the Kingston scene as Jr Walker was to Motown and Detroit – equally able to stand on his own as an instrumental lead, and really keep a strong soul instrumental spirit! Tommy blows with ... LP, Vinyl record album

Reggae Power (180 gram orange vinyl pressing)
Trojan/Music On Vinyl (Netherlands), Late 60s. New Copy (reissue)
LP...$27.99 29.99
A great set of early work from The Ethiopians, and a strong testament to the production efforts of Karl JJ Johnson – maybe not the biggest name in Jamaican studio talent, but a producer with a great ear for the most soulful sounds bubbling up at the time! Johnson was known as Sir JJ – ... LP, Vinyl record album

Jackpot Of Hits (180 gram orange vinyl pressing)
Trojan/Music On Vinyl (Netherlands), Late 60s. New Copy (reissue)
LP...$27.99 32.99
That's a vintage British slot machine on the cover – ready to deliver a jackpot of hits from the early years of the legendary Trojan Records label! The work is all from that moment when rocksteady was crossing into early reggae – a time that Trojan covered beautifully as it introduced ... LP, Vinyl record album