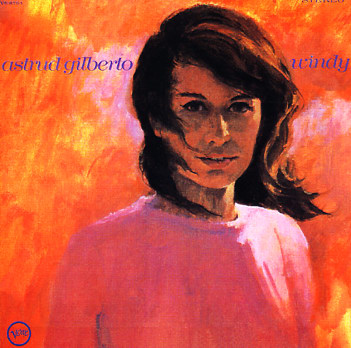 One of the hardest to find Astrud Gilberto records on Verve – and one of the best! Deodato, Don Sebesky, and Pat Williams did the arrangements – and the sound here is a bit different than some of the straighter Gilberto sets of the time – still very bossa-inspired, but also in a style that mixes in some great Sunshine Pop and 60s easy influences too – particularly on the tracks arranged by Williams! Tracks are all quite short, but get a heck of a lot of magic into a tiny space – and the album features some really wonderful songs that break Gilberto's pattern a bit – including versions of the Marcos Valle tracks "Crickets Sing For Anamaria" and "Chup Chup, I Got Away" – plus takes on "Windy", "Sing Me A Rainbow", "Never My Love", and "Where Are They Now?"  © 1996-2022, Dusty Groove, Inc.
(MGM stereo pressing.)

Cheganca
Verve, 1966. Near Mint- Gatefold
LP...$9.99
Bossa nova meets organ jazz – a real classic from the great Walter Wanderley, recorded right on the heels of his famous Rain Forest album for Verve! This set's in a very similar format to that one – core trio grooving with organ, bass, and drums – sometimes augmented with added ... LP, Vinyl record album

Composer Of Desafinado Plays
Verve, 1963. Very Good- Gatefold
LP...$7.99
Antonio Carlos Jobim's classic Verve session from 1963 – a tremendous record, done with a wonderful airy sound that became the trademark for bossa production in America – and which also had a great inspiration on the sound of mid 60s bossa in Brazil! Claus Ogerman arranged and conducts ... LP, Vinyl record album

Batucada
Verve, 1967. Very Good+ Gatefold
LP...$19.99
One of our favorite Walter Wanderley albums ever – and a record that moves past the more familiar bossa trio style used on his hits for Verve, into groovier new territory with added players who include Dom Um Romao on drums and Marcos Valle on guitar! And not only is the lineup expanded, but ... LP, Vinyl record album

Certain Smile, Certain Sadness
Verve, 1966. Near Mint-
LP...$34.99
Kind of a dream combination in one little album – especially if you dig breezy bossa from the 60s! Back in 1966, Verve Records got the great idea of teaming up its (then) biggest Brazilian imports – vocalist Astrud Gilberto and organist Walter Wanderley – both of whom were ... LP, Vinyl record album