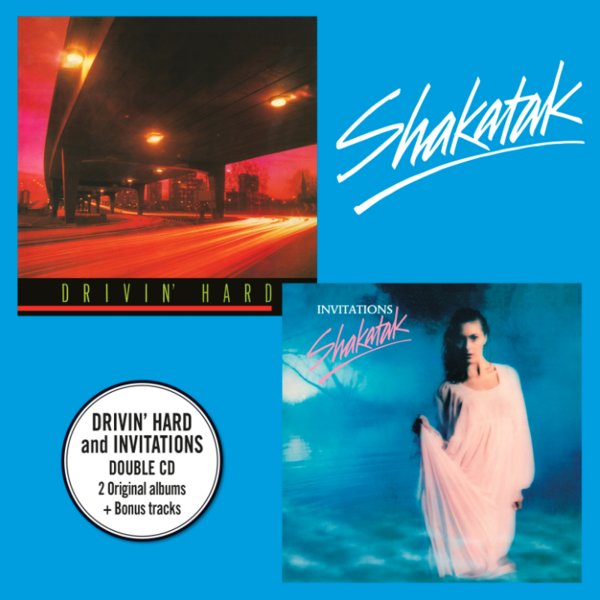 A pair of 80s classics from Shakatak – served up here with a lot of bonus tracks too! First up is Drivin Hard – smooth jazzy work from Shakatak – working here mostly as an instrumental outfit, but with a few vocal touches as well – all wrapped up in that classic 80s fusion style the group really helped forge at the time! The tracks are short and catchy – almost a distillation of sounds the Crusaders were hitting a few years before – taken slightly into more crossover territory, and electrified a bit too. Most of the instrumentation's still more late 70s than early 80s, despite the date of the set – and titles include "Livin In The UK", "Late Night Flight", "Waves", "Steppin", "Toot The Shoot", and "Covina". Next is Invitations – the first Shakatak album to heavily use vocals – and a set that marks a great move by the group into soul music! At a time when jazzier styles were becoming welcome in 80s soul, Shakatak's sound is very well placed – a smooth blend of keyboards and guitar, set to sweet-stepping rhythms that also prove to be great for the female vocals on the set! The approach is a bit like some of the best soul fusion over at Columbia Records at the start of the 80s – or a bit like work coming from the Crusaders camp – and despite the UK origins of the set, the group more than match the best US releases of this nature at the time. Titles include "I Lose Myself", "Invitations", "Lonely Afternoon", "Steppin Out", "Usual Situation", and "Sol Fuego". CD features 8 more bonus tracks – including "Livin In The UK (full length mix)", "Brazilian Dawn (12" mix)", "Invitations (disco mix)", "Lose Myself (rmx)", "Stranger (edit)", "Invitations (radio rmx)", and "Lonely Afternoon (rmx)".  © 1996-2023, Dusty Groove, Inc.

Best Of Roy Ayers – Soul Essential Series
Polydor, 1970s. New Copy
CD...$5.99 13.99
Roy's so great, we'd be hard pressed to sum up his genius in a simple greatest hits set – but we love his work so much, that any sort of collection is always a treat! The set brings together 15 of Roy's hippest numbers for Polydor – including some early funk tracks that have now become ... CD

JJ Band (with bonus tracks)
Polydor/Sonorama (Germany), 1970. New Copy
CD...$7.99 16.99
A lost bit of European funk from the JJ Band – a Belgian combo from the start of the 70s, and one with shared members of the more famous Euro funk groups Chakachas and El Chicles! As with those groups, the style here is nicely offbeat – elements learned from American soul and jazz, but ... CD