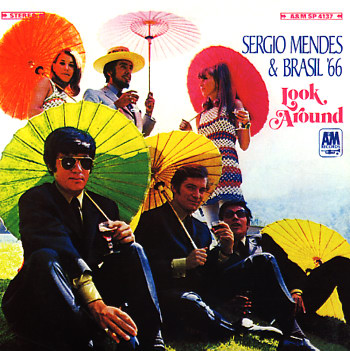 Dreamy bossa pop from the A&M studios of the 60s – the Brasil 66 sound at its best! The style here is a perfect blend of real Brazilian influences and some of the hipper styles bubbling in the LA studio scene of the time – all locked together perfectly by Sergio Mendes, in the twin-voiced style that let Brasil 66 transform any tune they could get their hands on! There's some really great numbers here of Brazilian origin – including Joao Donato's "The Frog", Marcos Valle's "Batucada", and Gilberto Gil's "Roda" – not to mention Sergio's own "Look Around", which is an especially charming number! Other titles include "The Look Of Love", "Pradizer Adeus", and "Like A Lover".  © 1996-2021, Dusty Groove, Inc.
(Brown label stereo pressing. Cover has moderate wear down the opening on the back, but is otherwise in nice shape.)

Essential Jimmy Rushing
Vanguard, 1954/1955. Very Good+ 2LP Gatefold
LP...$4.99
Vocalist Jimmy Rushing first came to fame working with Count Basie in the 30s, but it wasn't until the 50s that he really got the chance to step out on his own and cut a number of great sessions in the studio! This 2LP set features one of Jimmy's finest moments of the 50s – material recorded ... LP, Vinyl record album