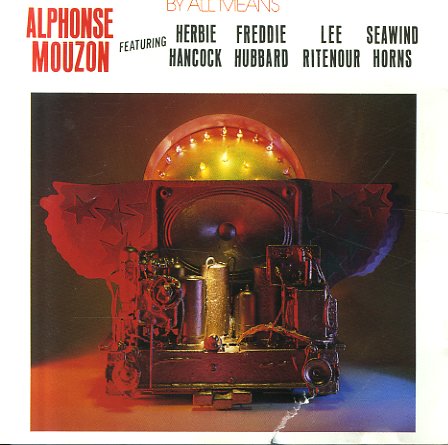 Also available
Alphonse Mouzon — By All Means ... CD 13.99
A killer bit of soulful fusion – recorded by the legendary drummer Alponse Mouzon after his harder-jamming 70s years, in a mode that brings in some nice currents of jazz funk and soul! The group's an all-star lineup – Herbie Hancock on Fender Rhodes and piano, Freddie Hubbard on trumpet, Lee Ritenour on guitar, and Paul Jackson on bass – working together strongly under the guidance of Mouzon, who's really finding a new side of his talents here. The tunes groove wonderfully – never too over the top, and always in the smooth soulful mode that was the best part of major label fusion in the late 70s. Mouzon plays a fair bit of keyboards next to Herbie's acoustic and electric piano, and tracks are long, with some really nicely jazzy grooves. Titles include "The Jogger", "Do I Have To", "Space Invaders", and "The Next Time We Love".  © 1996-2022, Dusty Groove, Inc.