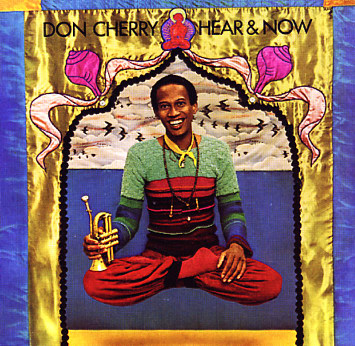 Also available
Don Cherry — Hear & Now ... CD 10.99
Important 70s work from Don Cherry – one of the first albums to bring his overseas experiments to a larger US audience! The set builds nicely off of styles that Don forged earlier in France and Scandinavia – a freer style of music than his work with Ornette Coleman, and a richly organic groove that builds up strongly from the bottom, often with elements of world music settled in alongside the jazz – but there's also some funkier moments here too, a bit like the Brown Rice album, but looser overall! The groups on most numbers are relatively large and spiritual – almost like Alice Coltrane at times, but a bit more electric and funky at others – and players include Collin Walcott on sitar, Michael Brecker on saxes, Cliff Carter on keyboards, Lenny White and Tony Williams on drums, Lois Colin on harp, and Raphael Cruz on percussion. Cherry himself plays conch shells, bells, and flute in addition to his usual trumpet – and he even sings a bit on a few numbers, in a soulful, scatting sort of groove. Narada Michael Walden produced, and the whole set's got a very righteous feel – with tracks that include "Universal Mother", "Buddah's Blues", "Eagle Eye", "Mahakali", "Karmapa Chenno", "Surrender Rose", and "Journey Of Milarepa".  © 1996-2022, Dusty Groove, Inc.
(Out of print, HDCD Japanese pressing.)

Complete Communion
Blue Note, 1965. Used
CD...$19.99 24.99
Arguably the best of Cherry's albums for Blue Note – and a real masterpiece of soulful avant playing! The group features Cherry on cornet, Gato Barbieri on tenor (and he's incredible, by the way!), Henry Grimes on bass, and Ed Blackwell on drums. Grimes and Blackwell are more than just ... CD