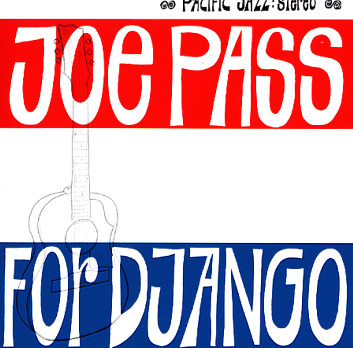 An album dedicated to the great Django Reinhardt – but one that also comes across with plenty of west coast touches too – just what you'd expect for the meeting of the young Joe Pass and the Pacific Jazz label! The format is somewhat Django-esque – with lead guitar work from Joe Pass, plus rhythm guitar support from John Pisano – creating some of the guitar interplay you'd have in a gypsy swing record – but the groove's also a bit more modern than some of Django's classics, and there's a lighter, breezier approach here that's very much in the mode of other Pass records from the 60s – at least the small group ones! The whole thing makes for a very unique set from Pass – with the quartet rounded out with Jim Hughart on bass and Colin Bailey on drums – on titles that include "Django", "For Django", "Fluer D'Ennui", "Django's Castle", and "Nuages".  © 1996-2022, Dusty Groove, Inc.
(Part of the Blue Note Tone Poet series – heavy vinyl and cover!)