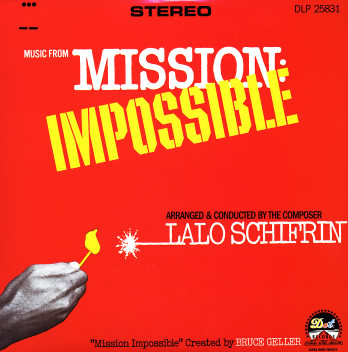 A familiar record – but a fantastic one! You probably all know the famous theme to "Mission Impossible" – Lalo Schfrin's beautiful jazzy number, with three piano notes revolving over and over again with incredible intensity – and the rest of the record is every bit as great, filled with a wonderful mix of groovy styles! The groove ranges from fast bossa to groovy 60s crime jazz to sparer tenser numbers that still manage to move nicely – and listening to the record over the years, our ears are always happily surprised at the level of genius that was allowed expression in the guise of a normal TV soundtrack. Cuts include "Jim On The Move", "The Plot", "The Sniper", "Danger", and "Barney Does It All".  © 1996-2022, Dusty Groove, Inc.
(Stereo pressing with deep groove. Cover has some wear and aging, lightly bent corners, clear tape around the edges and a bit of pen.)

Rosemary's Baby
Dot, 1968. Near Mint-
LP...$29.99
An amazing little soundtrack – one that's as spooky and eerie as the film for which it was written, and which was also one of the few American recordings issued by Polish jazz great Krzysztof Komeda! The core of the album is an especially haunting theme – one hummed as a lullaby by Mia ... LP, Vinyl record album