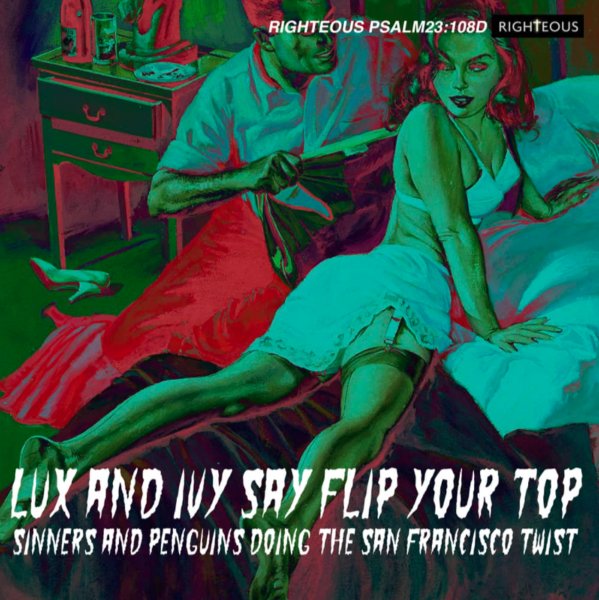 One of the coolest collections to ever bear the name of Lux and Ivy in the title – a really great genre-busting collection of odd, offbeat, and unusual tracks from the vintage 45 underground – very much served up in the mix of modes the duo explored in The Cramps! There's a real love of the 7" single that informs the collection – that special sense of surprise and anticipation when dropping the needle on a vintage 45 – delivered nicely here as the package steps through a whopping 50 tracks over the course of 2CDs! Titles include "Kiss Me Goodnight" by Tony Castle, "I'm Gonna Murder My Baby" by Pat Hare, "The Chinese Rock N Roll" by The Flock Rocker, Annie Miss Fanny" by Mel Dorsey, "Story Of Susie" by Billy Woods with Kim Fowley, "Frustration" by The Zanies, "Too Big For Her Bikini" by Gerry Granahan, "Fallout Filly" by Chris Cerf & The Harvard Lampoon Tabernacle Choir, "No More" by The Uptones, "Tarzan" by Artie Wilson, "Zimba Lulu" by The Rays, "You Tarzan Me Jane" by Glenn Willings, "Choo Choo Train" by Ritchie Hart, "Little Lil" by Mel Dorsey & the Heartbeats, "Fallout" by Aston Martin & The Moon Discs, "Kalani Honey" by John Paul Jones, "The Switch" by Slim Marbles, "Miss Froggie" by Warren Smith, and lots lots more!  © 1996-2023, Dusty Groove, Inc.