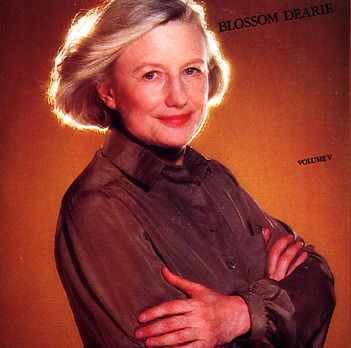 A live little set from Blossom Dearie – one recorded in Reno at the end of the 70s, with mostly Blossom on piano and vocals, plus a bit of bass from Bill Takas and some guest duet vocals from Bob Dorough! The album really captures the charm and grace of Blossom in her later live years – a mode that's relaxed, but confident – able to come across with new wisdom on the sadder, mellower tunes – and possibly even more wit on the more upbeat numbers! Dorough's presence is especially great, and his hipster voice only adds more electricity to the record – and titles here include "I'm Shadowing You", "Baby It's Cold Outside", "I'm Hip", "When The World Was Young", "Sweet Surprise", "Ballad Of The Shape Of Things", "Lush Life", and "Two Sleepy People".  © 1996-2022, Dusty Groove, Inc.
(Out of print.)

Blossom's Planet
Daffodil, 2002. Used
CD...$16.99
A new record by Blossom Dearie – and a really nice one! The set's on her own Daffodil label, but unlike a lot of the sets on that label, which are mostly trio ones, this one features a full group – with great arrangements by Cesar Camargo Mariano, a talent behind some of our favorite ... CD

Our Favorite Songs
Daffodil, 1970s. Used
CD...$8.99
A mixture of studio and live recordings from Blossom Dearie – pulled together from some of her earlier albums on the Daffodil label into a great expanded package on CD! Most of the tunes here are done in an intimate, personal manner – with Dearie on vocals and keyboards, and just a bit ... CD

Messenger
Blue Note, 1997. Used
CD...$2.99
Early genius from Kurt Elling – one of Blue Note's best vocal signings of the 90s, and a richly talented singer who's still not well understood by many audiences! The set's got Kurt doing a bit of everything he does great – completely transforming old standards like "Nature ... CD