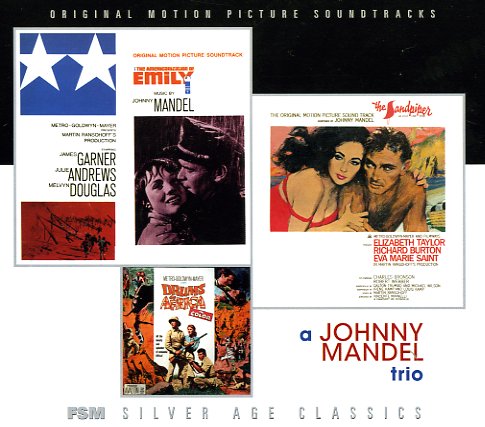 An amazing tribute to the soundtrack talents of Johnny Mandel – a package that features three classics from the 60s, with even more work than was on the original albums! First up is The Americanization Of Emily – one of those soundtracks that outlived the life of the film, or at had a title theme that was more famous than the movie! "Emily" is one of the best ballads to be penned in the 60s – a dreamy number offered up here in a number of different ways by Johnny Mandel – with strings, reeds, and in larger orchestral passages – augmented here with a range of other movie tracks that includes 4 "bonus score" songs, and 7 more numbers pulled from "source music" materials! Titles include the famous "Emily" theme – plus "The Next Day", "Condolence Call", "Surprise", "Tea Party", "I'll Walk Alone", "I Know Why & So Do You", and "Vacation In Sussex". The Sandpiper is an amazing 60s soundtrack – one that's infinitely better than the film for which it was written! Johnny Mandel's at the height of his powers here – blending in jazzy elements from his west coast 50s roots with lush strings, shimmering orchestrations, and some complex touches that are simply breathtaking – really amazing music that marks a whole new level in film scoring for the 60s. The main theme – "The Shadow Of Your Smile" – was recorded endlessly in the decade – but the original version here is tremendous, spun out over a set of tracks that almost work like a mini-suite based on the same themes. There's some surprising jazzy elements at points – and the reissue features 23 tracks pulled from the film, source music, and alternate recordings – plus the 9 tracks that also appeared on the original album – a whopping 32 numbers that include "To San Simeon/Run Danny Run", "Art Gallery Revisited", "Weekend Montage Conclusion", "Thanks For The Mammaries", "Bongo Bass & Guitar Congo", "Monterey Restaurant", "Shadow Of Your Smile", "Art Gallery", "Bird Bath", "Seduction", and "Weekend Montage". Last up is Drums Of Africa – an overlooked score that has way more to offer than just the drums promised in the title! In fact, although percussion figures in the instrumentation, the real charm is in Johnny Mandel's tighter horn charts – which mix jazzy shades on reeds that are totally great, almost with a style that hints at some of the more spiritual jazz to come at the end of the 60s – alongside other numbers that have a more dramatic guitar in the lead. "The River Love" features vocals from Frankie Avalon – but the best numbers are the instrumentals by Mandel!  © 1996-2022, Dusty Groove, Inc.
(Out of print and still sealed! Shrink has a small tear at the top.)