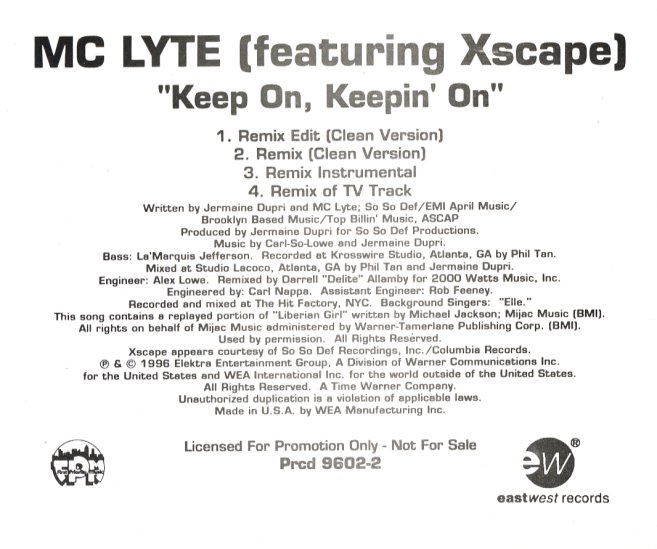 (Out of print promotional single.)

Odd Couple
Atlantic/Downtown, 2008. Used
CD...$2.99
A round two knockout for Gnarls Barkley – an album we think is better than the landmark St Elsewhere LP – boisterous pop art & soul from Danger Mouse and Cee-Lo! We were slightly trepid when the Odd Couple was announced, fearing a hasty attempt to rekindle the magic that clearly ... CD

Step In The Arena
Chrysalis, 1991. Used
CD...$8.99
One of the finest early efforts from Premier and Guru – their second album – and it's not only one of Gang Starr's greatest, it's one of the greatest hip hop albums, period. Guru's mic presence is as sharply on point as ever here, and the Primo production is also at peak precision. ... CD

Dare Iz A Darkside
Rush, 1994. Used
CD...$6.99
Redman at an early peak – raw cosmic funk-steeped hip hop from the wildly creative, gritty-voiced man himself! Like a lot of the greatest 90s hip hop, there's a strong George Clinton influence to the beats – but the thick atmosphere is really on another level – then and now, ... CD

Dah Shinin'
Wreck, 1995. Used
CD...$29.99
Classic Boot Camp hip hop from the Clik's peak era – with timeless production by Da Beatminerz. Stark, hard hitting beats of forthright rhymes from the heart of the mid 90s – such a classic era for hip hop in general, and this one strands strong even in such impeccable company! It might ... CD