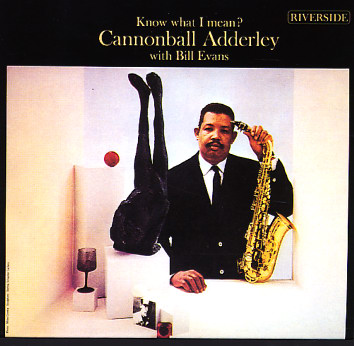 Know What I Mean? (Japanese pressing – with bonus tracks)

Beautiful early work from Cannonball Adderley – and a record that's quite different than most of his better known sets from the time! The album's more spare and stripped-down than usual – with Cannon's alto in a quartet alongside Bill Evans on piano, Percy Heath on bass, and Connie Kay on drums. The style is almost more that of Evans than it is Cannonball – lightly lyrical, with a good sense of space – in a way that has Adderley playing out front very strongly, cutting some beautiful lines with his solos, in a really unfettered way! Titles include versions of two of Evans' tracks – "Waltz For Debby" and "Know What I Mean?" – plus nice moody takes on other material, like John Lewis' "Venice", Clifford Jordan's "Toy", and Gordon Jenkins' "Goodbye" – plus two alternate takes.  © 1996-2022, Dusty Groove, Inc.
(Out of print, 1991 Japanese pressing with 2 bonus tracks.)