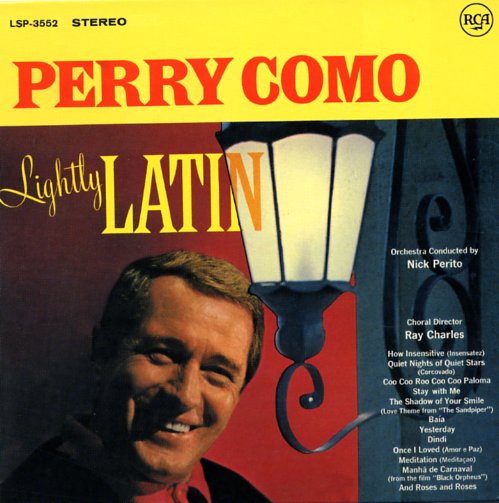 One of the most sublime albums we've ever heard from Perry Como – a set that definitely takes its Latin lightly, and instead really goes for the best sort of mellow side of the Como sound! There's definitely a few bossa touches in the mix – a bit of acoustic guitar or light percussion – but they're added in very sparely, and couched with a beautifully subtle wall of sound from arranger Nick Perito, who works here with a lot more understatement than on some other records. Como's vocals are very far from pop – and the album brings out his maturing style wonderfully with a spacious, soft-toned style of production. Titles include "Dindi", "Once I Loved", "Stay With Me", "How Insensitive", "The Shadow Of Your Smile", "Baia", and "Manha De Carnaval". CD features 4 bonus tracks too – including "Perhaps Perhaps Perhaps", "Little Boat", "Pardon My English", and "Happiness Comes Happiness Goes".  © 1996-2022, Dusty Groove, Inc.
(Out of print, 2007 pressing – includes obi!)

Rosie Solves The Swingin Riddle
RCA (Spain), 1960. Used
CD...$9.99
A rare gem from Rosemary Clooney, and a great set done with arranger Nelson Riddle – grooving nicely in a bigger band mode, but inflected with plenty of great Riddle touches on the instrumentation – in a way that matches the playful quality of Rosie's vocals! The overall sound is quite ... CD

Beautiful Friendship (Japanese paper sleeve edition)
SSJ (Japan), 1963/1964. Used
CD...$24.99
A great date from the non-Louis Prima years of Keely Smith – a rare radio performance done with backing from the Count Basie Band! Both Keely and Basie are at the height of their powers here – and the album has a format that alternates vocal numbers with some equally great instrumental ... CD

Night Mood
RCA/BMG (Japan), 1960. Used
CD...$19.99
A great singer, and a real standout album that's sadly been lost beneath the shifting sands of time! Toni Harper's working here with arranger Marty Paich – in a mode that's jazzy, but with soulful undercurrents – in that sophisticatedly swinging style that made Paich one of the best ... CD