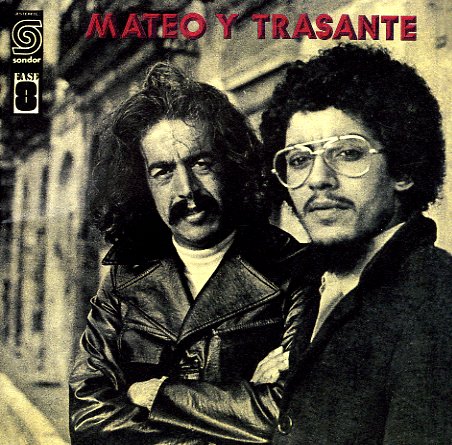 An amazing little record from the Uruguay scene of the 70s – not as much as a hotbed of activity as some other South American nations, but still home to a few key geniuses – like the brilliant Eduardo Mateo! Mateo works here alongside musical partner Jorge Trasante – who mixes a lot of earthy percussion with Eduardo's dark vocals and guitar lines – in a style that's far from folksy, and has more of the complicated appeal of some of the organic work from Brazil during the post-Tropicalia years! And like some of the more heavenly Brazilian music of the period, there's a really transcendent feel to the whole thing – a vocal power that goes beyond the boundaries of language, and instrumentation that's simple and subtle, but in ways that are light years away from anything going on in the US or UK. Other players add in some key extra elements – a bit of electric bass here, some funky flute there – to inflect the tunes with some hipper, jazzy elements that are really wonderful. Titles include "Dulce Brillo", "Canto A Los Soles", "Palomas", "El Blues Para Mama", "Voz De Diamantes", and "Cancion Para El Tamborero".  © 1996-2022, Dusty Groove, Inc.
(Out of print.)

Ipan In Xiktli Metztli – Mexico Magico Cosmico – El Ombligo De La Luna (LP style sleeve)
Luis Perez (Mexico), 1981. Used Gatefold
CD...$14.99
A wonderfully hard-to-categorize album from the start of the 80s – a Mexican record that mixes folkloric roots with electronic instrumentation – but all in a way that sounds much more ancient than you'd expect for the time! The fusion of modes here is wonderful – almost at a ... CD